A shooting at a Humboldt basketball game has left one dead and two others wounded. The altercation took place last Tuesday night during the Vikings vs North Side Indians game at Humboldt Jr./Sr. High School.

Humboldt City Schools put out a press release Tuesday night, acknowledging the shooting, “This evening at the Humboldt High School Basketball game versus North Side High School, there was an altercation between two adults that resulted in the exchange of gunfire. No students were involved in the incident and no students were injured. The Humboldt High School resource officer and Humboldt police immediately secured the area and is working to apprehend the suspect.”

On Wednesday, Humboldt police issued a press release. According to the report, HPD responded to the gymnasium of Humboldt Jr./Sr. High School around 8:20 p.m. on November 30 in reference to shots fired. Upon arrival, Justin Kevon Pankey, 21-year-old black male of Humboldt, was shot and died at the scene.

Police discovered Xavier Clifton, 18-year-old from Jackson, Tenn., had been shot and was airlifted to a trauma center in Memphis. A third victim, Dontavious Cross was also shot and was taken to the hospital via private vehicle, was treated and released.

Tuesday night after the shooting, Humboldt police immediately locked down the gym. No one was let in and no one was allowed to leave. This is protocol in an active shooter event.

Eventually, players were allowed to leave and turned over to their parents.

“The one thing I want us to remember is that, as adults, we have to know that schools are safe havens for children,” said Dr. Epperson. “While we try to educate our students in a safe and nurturing environment, sometimes unforeseen circumstances can alter processes and procedures. I would like to reiterate the fact that Humboldt did not have a school shooting. Humboldt had an unforeseen incident at an athletic event that turned out to be a tragedy.”

She noted that preventative measures have been discussed for future athletic events, including heightening security and more monitoring at athletic events.

Dr. Epperson closed all schools last Wednesday, the day after the shooting. Classes resumed Thursday. She praised the neighboring superintendents and school systems in the area who reached out and sent social workers or counselors.

“As we move forward, we will continue to be transparent with our families and always strive to provide a safe and nurturing environment for our students as we educate them,” Dr. Epperson said as she concluded her portion of the press conference.

Humboldt Assistant Police Chief Dan Ables was next at the podium. Chief Ables began by offering the department’s condolences to the families of all involved. Ables also thanked all the neighboring law enforcement agencies that assisted.

Ables noted the investigation is ongoing and some information at that time would not be released. He recanted the events of the evening to the media.

Ables said Hardiman had turned himself into Humboldt police just hours after a press release was issued Wednesday afternoon. Hardiman was booked in and taken to Gibson County Correctional Complex.

District Attorney Frederick Agee, who represents Gibson, Crockett and Haywood counties, addressed the media.  Agee praised the school staff and law enforcement for their professionalism during the tragic event and the following investigation.

“This could have been a very chaotic scene at Humboldt High School,” Agee said. “They did a great job of preserving the crime scene given the fact that the high school basketball game was going on. They did an awesome job. They worked together. They were professional. And it could have been very different.”

DA Agee noted that school property is a gun-free zone.

“Ladies and gentlemen, make no mistake about it, our office will fully prosecute this case to the full extent of the law,” Agee firmly said. “It is our intent; it will be my mission as the D.A. to make sure that Jadon Hardiman never walks as a free man again. We will not allow violent criminal acts to take place in our schools in Gibson County.” 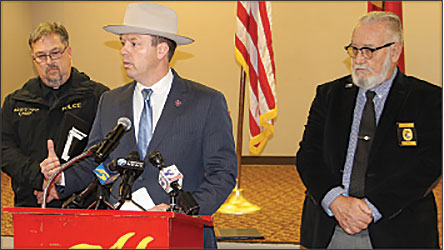 “There were several hundred people that were doing the right thing in the gym,” Agee continued. “The basketball players doing something positive, the cheerleaders doing something positive, the coaches, the parents who were in attendance, and we had violent people come into our community from another community and commit a violent act. So we will prosecute this matter to the fullest extent of the law.”

DA Agee said Hardiman’s bail was set at $1.5-million but the DA’s office has asked the judge to reconsider bail and revoke his bond, pending a preliminary hearing. Agee said Hardiman is a threat to the community and should remain in jail.

Within a few hours of the press conference, a special grand jury was called in session, the first time in 30 years, and revoked Hardiman’s bond.

Humboldt Mayor Marvin Sikes was the last to speak during the press conference. Mayor Sikes poured his heart out of the tragedy that happened on school property. Mayor Sikes said Humboldt Police Chief was keeping him updated throughout the evening.

Like many concerned citizens and neighbors, Sikes kept up with social media. He was amazed at the outpouring of love everyone was sending to Humboldt and the people. He said it touched his heart.

Sikes praised the Humboldt Police Department and the cooperation with all the other neighboring police that worked the crime scene. He urged people to be more forthcoming when it comes to crimes committed in the area.

At the end of the press conference, a Q&A segment followed. One question was about counseling services for students. Dr. Epperson said Humboldt City Schools has counselors and social workers on staff each day. She noted other schools and agencies reached out to her and offered to lend assistance. Dr. Epperson took them up on their offers and welcomed other school counselors and social workers to help students get through this trauma they have experienced.

Another question asked was if Hardiman and Pankey knew each other. DA Agee said it was his understanding that the two did indeed know each other. But since this is still an ongoing investigation Agee would not elaborate any further.

Ables and Agee both do not think the other two shooting victims, Cross and Clifton, knew Hardiman or Pankey, and were simply innocent bystanders.

Agee said Clifton was listed in serious condition after being shot in the neck. He is paralyzed from the neck down. Agee praised HPD Sgt. Laura Cano for potentially saving Clifton’s life, using her training and skills. Without Cano’s care and quick response, Agee firmly believes Clifton would have probably died from his wounds.

Questions were raised about future heightening of security. Dr. Epperson noted that most rural towns do not have that “prison mentality” where metal detectors are used or people being “wanded” as they enter.

One security measure Dr. Epperson and school officials are looking into is using QR codes to pre-purchase tickets. They would use a digital ticket to enter games. The added bonus would be having a roster of those attending the games.

Agee said the D.A.’s office will request a preliminary hearing for Hardiman. He hopes it will be sometime in December but it will be left up to the judge.

Police and the D.A. said this is an ongoing investigation. Anyone with information is asked to call the Humboldt Police Department at 731-784-1322.