Unsuspecting drivers in Gibson County are being pulled over by Gibson County sheriff’s deputies each year. But in December, instead of writing tickets, the deputies are doing good deeds, handing out $4,000 worth of gift certificates that can be used at dozens of businesses throughout the county.

Sheriff Thomas said last year during the holidays there was a lull due to COVID. His office wanted to do something to lift up people’s spirits. That’s when he and Greater Gibson County Chamber Executive Director Libby Wickersham came up with a plan.

“Last year, after 2020 had been so difficult for so many people, Sheriff Thomas reached out to me to see if we would partner with his department to bring some ‘cheer’ to unsuspecting, law-abiding citizens during the month of December,” said Director Wickersham. “He asked if we thought we could get a few sponsors to help with the promotion, and I told him that wouldn’t be a problem. Little to his and my surprise, we had an overwhelming response.” 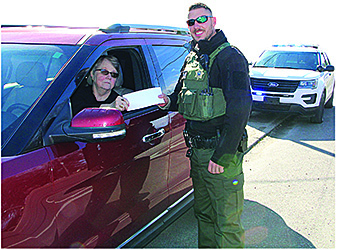 “The Gibson County Sheriff’s Office is very thankful to all three chambers in Gibson County and ask the businesses that are supporting this project for the second year,” Sheriff Thomas said. “This is a great time to humanize the badge a little and for the citizens we serve to have a pleasant interaction with our deputies. Too often, our encounters are on bad terms and this type of interaction is not only good for the citizens but also for the deputies. It’s just a great time to show appreciation to the good people of Gibson County.”

“I absolutely love this idea. It’s truly a win-win-win situation—the sheriff’s department has a great time giving these out, the citizens get a fun gift and the store owners get shoppers,” said Humboldt Chamber Executive Amanda Love. “You couldn’t ask for a better program for Gibson County.”

“The Chamber Cash programs we have in each area promote shopping local and reward the businesses that invest in the Chamber of Commerce,” said Milan Chamber of Commerce Executive Director Julie Allen Ward. “These programs funnel thousands of dollars each year back into Gibson County’s economy.”

Wickersham said the Sheriff’s Santas program was so successful last year they wanted to continue it again this year. Last year, it was a last minute decision and they were not able to solicit donations county-wide. All three chambers got involved with their Chamber Cash programs and Sheriff’s Santas became a reality.

Sheriff Thomas says not only does the Chamber Cash help out unsuspecting recipients, it also shines a positive light on law enforcement. This program is a means for citizens and law enforcement officers to have a positive experience. The deputies feel good for making someone’s day a little brighter and the one receiving the Chamber Cash feels good about having a free gift to spend locally. That business owner feels good knowing the program helped out their store in a small but thankful way.

“We appreciate Sheriff Thomas’ support of the programs and his creativity in rewarding law-abiding citizens during the season of giving,” stated Director Ward. “Many sponsors throughout the county have come together to make this happen. This is just another example of great folks of Gibson County working together.”

Sheriff Thomas and his office, and chamber directors Ward, Wickersham and Love worked hand-in-hand together in hopes of making someone’s holiday a little bit brighter. To learn more about Chamber Cash, call or visit your local chamber of commerce.

The man behind the Mass Band plan