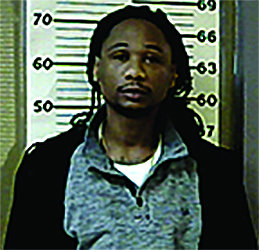 A Humboldt man is facing charges of attempted murder after shooting a Trenton man in his home last Monday morning.

Shortly after 3:15 a.m. on Monday, November 22, officers were dispatched to a home on West Tenth Street in Trenton in response to a shooting where they found the victim, Thomas Buchanan, suffering from multiple gunshot wounds.

Witnesses reportedly told Patrolman Adrian Pillow that the shooter fled the home on foot. Ptl. Pillow administered first aid to Buchanan, applying pressure to the wounds until the medics arrived on the scene.

According to Ptl. Pillow, the victim identified the shooter as Jarvis Emerson, stating that Emerson had come into his bedroom, turned on the lights and began shooting.

Buchanan was transported from the scene via ambulance to the Trenton helicopter pad, where he was airlifted to the Med in Memphis.

One of the witnesses also positively identified Emerson, the father of her child, as the shooter, stating that he was also shooting at her. Other witnesses told law enforcement official that Emerson had broken into the home through the garage door, then attempted to kill Buchanan while children were sleeping in the home.

The crime is being investigated as a domestic violence incident.

At last report, Buchanan underwent surgery for the gunshot wounds and is currently in stable condition.

Emerson is still at large following the shooting. If you have any information on Emerson’s whereabouts, contact the Trenton Police Department at 855-1413.