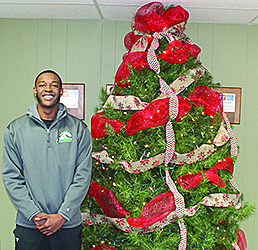 R.J. Abernathy is a name that rumbled the PA at Viking basketball games. Abernathy is currently a sophomore at Colombia State Community College in Colombia, Tenn. playing point guard in the game he loves.

“Life has been good,” said Abernathy. “ I appreciate those lessons my parents taught me and I understand those values now.”

Living in the world as a young adult can be frustrating and overwhelming.  At one time, parents were that crutch leaned on to cook, clean, wash clothes and even make those tough decisions.

“It took me a minute to adjust to it, but things are working better,” said Abernathy.

Talking about his love for basketball, he reminisced about his high school days.  In high school, Abernathy played as a point guard and would sink the threes on the spot. Unlike other players, he had the chance to play under his father’s leadership. One might think that was an easy task to do, but Abernathy did not get playing time just because his father was the coach.  He had to earn his spot just like any other player.

“I loved playing under my father,” said Abernathy. “It gave us extra time together but it was also annoying at times because we lived under the same roof.”

Just like life changes so did basketball in college.  He currently is a point guard for the Chargers at Colombia State.

“The college game of basketball is on another level and is much faster,” said Abernathy. “I am not the star of the team and not a big scorer but I am able to facilitate where everyone should be. When I played for my father, it definitely helped my IQ of the game.”

Abernathy completed a lot of extensive training including workouts that has enabled him to get stronger and become a better player.

“On the team, you have other guys that were once that “go to” guy,” said Abernathy.  “I adjusted my work ethic and bumped it up ten fold.”

His freshmen year, the team record was 22-10. They may have started out a little slow, but through perseverance, they ended up winning their conference his freshman year. Winning did not stop there. The team has continued to do their parts individually by listening to each other, working hard in practice and doing their parts individually. Before Thanksgiving, their record was 8-1 and first place in the west division. The team is pumped and ready to keep making marks throughout their conference. It is a fact that life will happen to everyone no matter where you are. Abernathy wants everyone to know that they should just keep moving. After this year, Abernathy plans to attend a four-year college. There have been a few looks but no offers or commitments yet.

“Don’t quit because there is a light at the end of the tunnel,” said Abernathy.

When basketball is no longer in the cards for Abernathy, he will use his business degree in the field of real estate.

“It was awkward playing against them at first,” said Abernathy. “But we all knew we had a job to do and it was not anything personal.”

Jones, Ward and Abernathy will meet again in March during the March Madness conference tournaments.  The tournament will be held in Dyersburg. You can bet Humboldt Viking fans will take that short trip to Dyersburg to see the trio on the court, only this time as opponents.