How far does $1-million go? When it comes to upgrading city parks, it goes a long way but maybe not as far as one might think. The city of Humboldt has finalized plans to renovate five park areas in Humboldt and submitted those plans to the state for final approval. 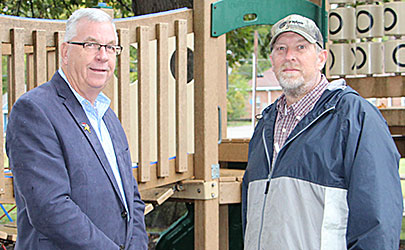 m Tennessee Department of Environment and Conservation (TDEC). The Local Park & Recreation Fund (LPRF) grant is a 50-50 grant, meaning the state funds half the grant and the city is responsible for the remaining portion.

In early 2018, TDEC notified cities across the state that LPRF grants were available. Humboldt applied. In August of 2018, Humboldt was approved for the grant. With city board approval, Mayor Marvin Sikes and his team moved forward. That’s when COVID hit and things came to a screeching halt.

As things began to get back to somewhat normal, contracts were signed in September 2020. Planning and engineering work began. TLM Associates, the city’s architect firm, finalized the plans in August 2021 and the plans were submitted to TDEC in September.

“This project has been a long time coming,” said Mayor Sikes. “Securing grants is always a long procedure with lots and lots of paperwork.”

Sikes and Parks & Recreation Director Jeff Graves worked with TLM to develop a plan. A good size portion of the grant will go toward getting the city’s parks ADA (Americans with Disabilities Act of 1990) compliant.

Since Bailey Park is by far the most utilized park in the city, a large portion of the total funding will go there. Upgrades at Bailey Park consist of resurfacing the parking lot, upgrading the concrete sidewalks and resurfacing the walking trail. All will now be ADA compliant once completed.

All of the old playground equipment will be removed and replaced with brand new equipment. There will be new playground surfacing and border material as well. The playground area will get new picnic tables, park benches and trash bins.

The building at Bailey Park will get a facelift with new windows and doors, and renovations for the restrooms and kitchen area will make them ADA compliant.

6th Street Park playground will also get all new surfacing and borders. The restrooms connected to the back of the gymnasium will be totally renovated. New concrete sidewalks will be installed to connect the restrooms, pavilion, playground, basketball courts and the parking area. The parking spaces in front of the gym will be restriped and concrete wheel-stops will be installed.

Viking Park’s restroom building will be totally revamped with all new fixtures and will be ADA compliant. A portion of the walking trail from the restrooms to the parking lot will be resurfaced. Concrete work and sidewalks in the stage area will be renovated.

At Spangler Park, the playground area will receive new surfacing and border materials. The restrooms at the softball fields will be renovated and new concrete sidewalks will be constructed to connect the fields. All work will be ADA compliant.

The final piece of the grant puzzle is a new area of Humboldt. The city’s empty lot at the corner of Central Ave. and Burrow St. will get a new pavilion. The 60×40 ft. open-air pavilion can be used for the farmers’ market, concerts, parties and all types of events. There will be three ceiling fans in the pavilion to keep things cool during the summer months. The pavilion will have LED lighting. In front of the pavilion will be a 20×30 concrete multi-use area.

Sidewalks will encompass the areas adjacent to the parking, the stage and along the southern line of the property. Light poles will be installed to light up the entire space.

When all is said and done, one can see just how far a million dollars can go. Paving, concrete work, playground equipment, resurfacing, restroom renovations and a pavilion—these things are not cheap and add up rather quickly. But once completed, five areas of Humboldt will be much better for citizens to enjoy and will all be ADA compliant.