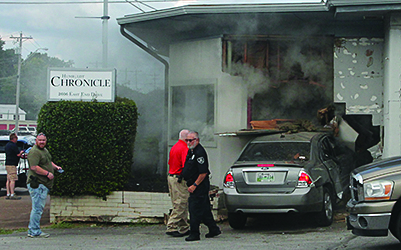 The Humboldt Chronicle is known for covering news stories on a weekly basis. But last week, the Chronicle was the news when a car crashed into the building, seriously injuring the driver.

Around 3:15 p.m., Tuesday, September 14, the Chronicle staff was working away as usual. That’s when everyone heard the sound of squealing tires for what seemed to be three or four seconds. Then came a huge crash when the Ford Fusion driven by Patrick Welch collided through the wall. The car became lodged halfway into the side office of the Chronicle office where employees enter and leave the building.

Frantic screams and cries echoed the office as smoke bellowed down the hallway.

“Luckily for the Chronicle staff, no one was in that office at the time of the wreck,” Editor Danny Wade said. “Lee Ann (Butler, general manager) was sitting in her office at her desk, just a few feet of where the car stopped. Her office shares a wall with the other office that got hit. There is a window between the offices, so she saw the crash as it happened. It definitely traumatized her.”

“I was sitting in my office, and I heard screaming from a co-worker,” said Associate Editor Katrina Smith. “My heart was racing and I began to shake. I saw the thick smoke quickly floating down the hallway and realized something was on fire.”

Gibson County Publishing General Sales Manager Kim Forbes has an office adjacent to Butler. Forbes’ office also has a window, so she too could see the car through Butler’s office window. Panic, screaming and fear overtook both ladies.

“I heard the tires squealing and a huge crash but I did not know at that time it was in our office,” Wade recalled, thinking it was a car crash in the street. “I ran outside looking in the street for vehicles but didn’t see any. When I ran around to the side of the building, I saw the carnage.”

Wade quickly ran back inside. By then smoke had begun filling the end offices. Butler and Forbes grabbed their belongings and retreated out the front door.

Smith and administrative assistant Lisa Pullen quickly grabbed their belongings and headed out the front door as well. Within seconds, the thick black smoked had filled the hallway to all of the side offices and making its way into the lobby.

With everyone out of the building, Wade ran back around to the side of the building. About that time, Assistant Fire Chief Leroy Kail arrived first on the accident scene. Humboldt police and Humboldt Area Rescue Squad were on the scene within a minute.

Kail approached the car but was unable to see inside due to the car halfway inside the building and covered with debris. He was able to call into the car, “Are you alright? Can you hear me? Can you speak?” 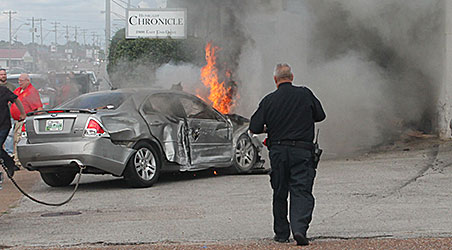 Welch was able to respond, which was a good sign.

Soon, more and more police, fire and rescue squad personnel were on site. Their first plan of action was to get the burning car out of the building to extinguish the fire and to get Welch out. By now, Welch had been inside the wrecked car for several minutes, breathing the dark black smoke bellowing from the motor.

Gibson County Emergency Medical ambulance arrived on the scene. With all emergency personnel working together, Welch was extricated from the fiery vehicle and transported to Jackson-Madison County General Hospital. He was later airlifted to the Med in Memphis. It was not known of Welch’s injuries or how severe. There were unconfirmed reports last Thursday that Welch had made it through surgery.

“After I had left Sonic, I noticed a car coming up behind me driving out of control,” said Henrietta Alexander who witnessed the accident. “I kept looking up in my rearview mirror because I didn’t know if the car was going to hit me or the car driving beside me. Shortly after that, he lost control of the car and crashed into the building. I parked my car and walked down the sidewalk.”

With East End Drive blocked off to traffic as emergency crews worked, people began gathering, many comforting the Chronicle staff. There were lots of prayers going up for them, and even more prayers for Welch.

Chronicle owner Victor Parkins booked it from Milan to Humboldt. He was actually on the phone with Butler when the crash happened and heard some of the commotion 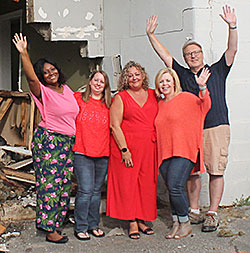 Bystanders began to flood the streets and were offering their concerns and prayers for both the staff and the driver.

In all of the turmoil, Smith kept her cool. She was snapping pictures and even went live of the Humboldt Chronicle’s Facebook page as the tragic event unfolded.

“Luckily for our staff, none of us were physically injured although we were definitely shaken by the accident,” Wade stated. “Everyone’s phones were blowing up with friends calling and texting wanting to know if we were alright. That’s what Humboldt people do; we all care about each other—Humboldt strong.”