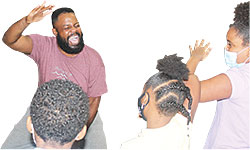 Wednesday was not the average day of learning for the students at East Elementary School. Not only were the students ready to learn, but they were treated with entertainment.  That treat was one

that got them  jumping and hyped up about life and learning.

“DaMac is a rapper who has a heart to see the youth of today excel,” said Hodge. “He is like a son to me and my family loves him like our own. He has a way of connecting with the youth with his inspirational message.”

Michael Lacoste, “DaMac” is from St. Louis, Mo. and grew up without a father. He travels the world sharing his story on how he overcame his hardships in life but found hope through rapping and praying.

“I grew up without a father. I had no idea on how to be a man or how to act like one,” said DaMac. “If I allowed that to control me, then I would not be here. You are not what your mishaps are. You are unique. You are special. Growing up in St. Louis, rapping is what we did. You would see us driving around with the windows down and playing music on our boom box.”

DaMac dropped lyrics of hope and challenged the students to be better than they were before.

“If you have a B in a class, that is good,” said DaMac. “Challenge yourself to be better.  Study harder and turn that B into an A. Do this in every area of your life; be better than before.”

There were two assemblies held in the school gym that lasted about 30 minutes.  With lots of physical exercise and words of hope, the students were definitely shaped up to be better than before. Later that night, DaMac held a concert at First Assembly Church and delivered a powerful performance and message of God.