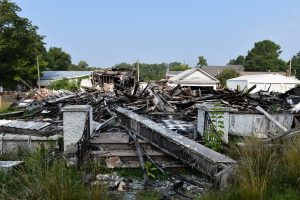 Mayor Sandy Simpson and the Rutherford City Board continued the discussion about what to do about the city sticker situation, but not before speaking directly to residents about the number of blighted buildings around town.

A number of citizens came to the meeting seeking answers about the properties, specifically the former Karnes and Sons Funeral Home, and Mayor Simpson made a point to get straight to the matter at hand.

“There was a post put on Facebook bashing the Board saying that we’re not upholding our ordinances, which is not true,” Mayor Simpson began. “Mr. Kenneth [Bell] is in the process of getting his property taken care of. The person that put this on Facebook and blasted us was supposed to be here to make us enforce our ordinances tonight. I don’t see her, so I asked them to be here to defend themselves.”

According to Mayor Simpson and Police Chief Adam Branch, the property has been in limbo because the cause of the fire is still technically under investigation. The Tennessee Bureau of Investigation reportedly suspects that the fire was caused by arson, so no one can clean up the property until the investigation is closed.

“That’s a nightmare and a half,” Mayor Simpson said. “We have gotten a letter from the insurance company’s attorney where they’ve denied the claim. Now the property owners are in a dispute with the insurance company. Until all that’s settled, I guess it can’t be touched, but the city can’t go on there and do anything because we don’t own the property.”

Mayor Simpson noted that the city had made an attempt to keep some of the overgrown properties from getting out of hand but would not be manicuring those lawns. 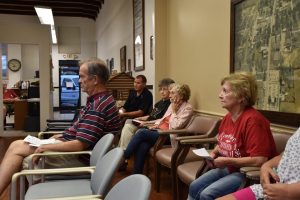 One resident stated that he did not blame the city for the state of the properties, but felt that something needed to be done about the abandoned buildings and high grass.

“We’ve got people from all over the country moving into Rutherford,” he said. “But what in the world do we have to offer them? We’ve got people that are letting their yards grow up, sheds are falling down, we’ve lost churches. The city’s getting blamed for it because it’s not been cleaned up. Someone is responsible. It’s not the city’s place. This town is a shambles.”

Chief Branch said that property owners could be cited into court if they don’t keep their properties cleaned up, but added that there was no state law that required Tennesseans to mow their grass. The situation only becomes a concern to the state when rats, snakes and other vermin can be traced to the property.

“I wish we had a county inspector that could condemn all these properties and tear them down,” Mayor Simpson said. “It’s very frustrating.”

The Board and Chief Branch discussed the possibility of attaching liens on some of the properties, but could not come to a conclusion about what to do with the eyesores.

Mayor Simpson stated that the city had cleaned out ditches along Main and Taylor streets, where the city will soon begin paving and noted that she understood that the Rutherford Grocery would be opening next month, another of the many questions that she had been fielding from residents.

The Board discussed the possibility of having the county collect Rutherford’s city stickers, but ultimately elected to let the issue die on the table.

Finance Director and City Recorder Donna Stricklin informed the Board that the city had collected for 600 city stickers thus far, with only 700 sold last year. If the county were to take over the city sticker processing for Rutherford, the County Clerk’s office would take $1 per ticket and 5 percent of the total price, amounting to more than $1,600 based on the number of tickets sold this year, leading the board to ultimately take no action on the matter.

Board members stated that they could see both sides of the argument, but felt that the fees that would have been going to the county could be better used in Rutherford.

“We should keep our money here,” added Alderwoman Annie Edwards. “I don’t care if it’s 15 cents. Rutherford is always down in revenue. Keep our money in this town.”

The Board thanked the city’s police and fire departments, as well as the Mennonite community, for their help in finding two children that were reported missing in the area of Main and Kay streets on July 17. The children were found safe in a nearby cornfield shortly after they went missing.

“I will say this about the Mennonite community,” said Alderman Parker. “What they did is just awesome. We are lucky to have them.”

Police Chief Adam Branch also informed the Board that his department had brought in approximately $286,000 in revenue through the sale of equipment.