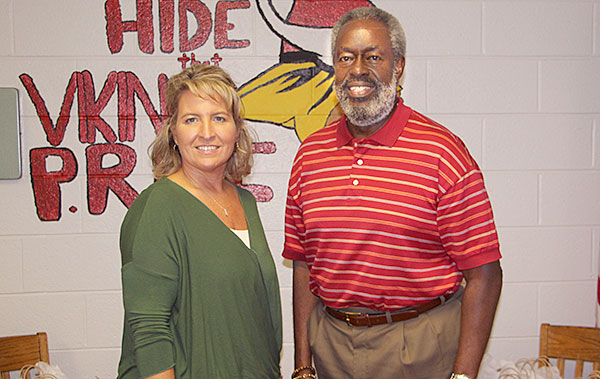 NEW PRINCIPALS – Humboldt Jr./Sr. High School will have two new interim principals for the upcoming school year. Debbie Lambert will serve as school principal while Ron Abernathy will assume the assistant principal position. Both have been part of the administrative team at HJSHS for the past few years.

When school begins this Thursday, students attending Humboldt Jr./Sr. High School will see a couple of familiar faces in the office. Debbie Lambert and Ron Abernathy have been promoted to new administrative positions.

The new duo’s first day in their new capacity was Friday, July 16. Lambert said she has spent most of her first week in training.

“Humboldt Jr./Sr. High School was named a Tennessee Trauma Informed high school,” Lambert said of some of the training she’s received. “Chandra Maclin, Teddy Pettigrew, Christina Youmans and myself received training in trauma enforced practices. I will train our staff next.”

Abernathy is no stranger to his new job.

“This is not my first principal position,” he noted. “I was interim principal last year before Ms. (Carla) Brown came in. I also was principal in Florida for six years, three years each at two different schools.”

“Mrs. Lambert is an experienced administrator with a strong understanding of instructional leadership,” stated new director of schools, Dr. Janice Epperson. “Her passion for education and her familiarity with the Humboldt community makes her the ideal choice for this role. Parents and teachers can expect a partnership and collaboration for the good of each student. Mrs. Lambert has strength to leverage passion and draw people into the cause of increasing student engagement and be willing to lead and learn equally. I look forward to our students flourishing under her leadership.”

“Mr. Abernathy earned degrees from Morehead State University as well as Louisiana State University,” Dr. Epperson stated. “He has been an educator since 1972 serving in various leadership positions. Mr. Abernathy brings knowledge in secondary education from athletics to discipline to curriculum and instruction. He is an asset to the administrative team at the Jr.&Sr. High School.”

Coach Ab. will also continue as head coach for the boys basketball team.

This year, schools will once again be back on a regular schedule, going five days a week and all classes in person. Buses will be running their regular routes around town. There will be no virtual students this school year.

“It’s going to be difficult,” Abernathy said of the expectations of students and teachers returning to the classroom. “Some kids have been out of school for over a year. The school day may be normal but school is not going to be normal. It will take a lot of work and communication.”

In March of 2020, all Tennessee schools were shutdown due to the COVID pandemic. For the 2020-21 school year, about half of the students were virtual students are did not step foot in the classroom. Those students that did attend in person only went to school two days a week.

“We’re going to keep our COVID protocols,” Lambert said going into the new school year. “Schools will be sanitized regularly.”

But what happens if and when someone tests positive for COVID? Lambert said the junior-senior high school is a one-to-one school, meaning there is a computer device for each student. Students that tested positive and those who might be under quarantine will be able to continue their school work at home virtually.

Lambert and Abernathy know that some students struggled with virtual school, not only in Humboldt, but across the state and the nation. Summer school offered in Humboldt helped many students with learning loss. Lambert said there will be interventions to fill in those learning gaps students may have encountered in the virtual classes.

As for the requirements to graduate, nothing has changed, Lambert noted. Students must have credits of four English, four math, two language, three science, three history/social studies, P.E., personal finance, lifetime wellness and fine arts. Graduates must complete 24 credits. Of course, there are several elective classes students will take during their four years of high school.

But for now, Lambert and Abernathy are focusing on getting the new school year off to a good start.

“It’s a work in progress,” Abernathy said of the upcoming school year. “You have to get back on the ship and figure out how to move forward. I’m looking forward to the new year. I support Mrs. Lambert and her vision. It will take an unselfish team effort.”

“I look forward to witnessing our district move from good to great! Mrs. Lambert and Mr. Abernathy are dedicated to our students, their academic growth, and their social and emotional needs. With the district’s focus on TACO (talent, academics, culture and climate, and operations), Humboldt Jr.&Sr. High School is fortunate to have a dynamic team to lead them to success this year,” concluded Dr. Epperson.