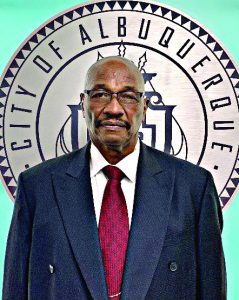 SYLVESTER STANLEY, a Trenton native, was appointed to the position of superintendent of Police Reform in Albuquerque, NM in March. Stanley, who has more than 40 years of service in law enforcement, is one of only three African American police chiefs in the history of the state.

Sylvester Stanley left Trenton as a teenager to serve his country and has since become one of the most well-respected names in law enforcement in New Mexico. So much so that he was recently appointed to one of the top leadership positions in the state’s capital.
In March, Stanley was chosen for the newly-created position of Superintendent of Police Reform in Albuquerque, New Mexico, after more than 40 years in law enforcement.
Stanley, 66, grew up in Trenton as the oldest of eight siblings. After their mother died when Stanley was 14, he became the man of the house, helping take care of the family along with his aunt before enlisting in the Army at the age of 17. Stanley served with the military police while overseas in Korea and continued his military police training at Ft. Riley, Kansas, upon his return.
After his discharge, Stanley moved to Junction City, Kansas, in 1976, continuing his career in law enforcement. He worked his way up from patrol officer to detective and attended college at night, eventually earning an Associates Degree in Criminal Justice. In 1982, Stanley took a position with the Bernalillo County Sheriff’s Department in New Mexico, eventually retiring in 2002 with the rank of captain.
While in Bernalillo County, Stanley served as division commander in each of the BCSD’s four divisions, Court Services, Administration, Field Services and Criminal Investigations. During the course of his career, he has trained in hostage negotiations, vice and gang investigations, child and youth services and management of the use of deadly force. He has graduated from the Southwest Command Staff College, the FBI National Academy, and has been a chief of police on four separate occasions.
Stanley is one of only three African Americans to ascend to the rank of police chief in the state of New Mexico.
In his new role as superintendent of Police Reform, Stanley is tasked with managing police academy operations and two internal affairs divisions, overseeing disciplinary procedures and reviewing the department’s uses of force.
Stanley also serves as the city’s deputy chief administrative officer.
In recent years, police officers have come under more scrutiny than ever before, especially where the use of force is concerned, and Superintendent Stanley takes his role very seriously, seeking to make everyone in his city feel safe, both from crime and from
“It’s an honor to continue my service to the community by taking on this new, innovative role,” Stanley said. “Bringing real reform and culture change is a mighty task. It’s no secret that the Department has been struggling to prevent and correct mistakes through training and to hold people accountable for misconduct when that training doesn’t work. But we are not going to give up on the vision we all share, to make it possible for people from all walks of life to feel safe in our city. This role will be pivotal not only for working with the DOJ, but for making sure that reform efforts will last even after the monitor is gone. In this executive-level position, I will oversee Academy operations, DOJ requirements related to training, and internal affairs matters including discipline. I have served as chief of police four times, and am one of only three African Americans in New Mexico who has made it to that rank. I look forward to making history with our community again as we build out this significant role.”