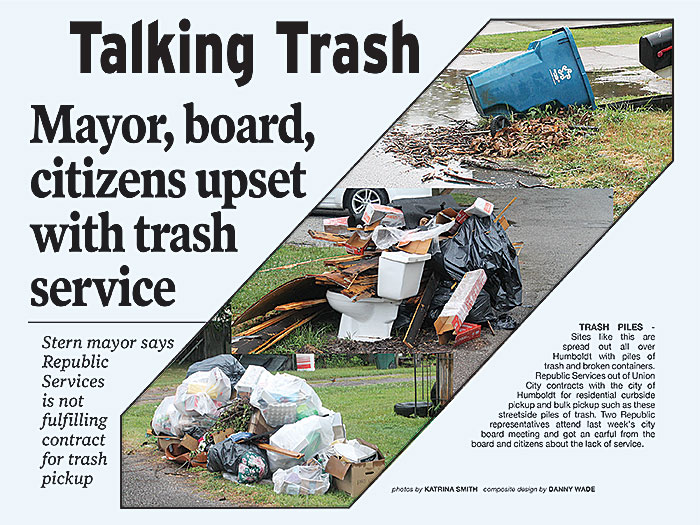 At the end of the Humboldt City Board meeting last week, discussion on the city’s trash pick up was on the agenda. The city contracts with Republic Services for residential curbside trash pick up and bulk pickup beside the streets.

Over the past several months, Mayor Marvin Sikes said city hall has received numerous complaints of roadside debris not being picked up in a timely manner, often times for weeks at a time. Other complaints from citizens are broken trash bins provided by Republic that are not being replaced.
Republic Services contract manager Chad Brown and operations manager Mac McCullough attended the meeting at the mayor’s request. 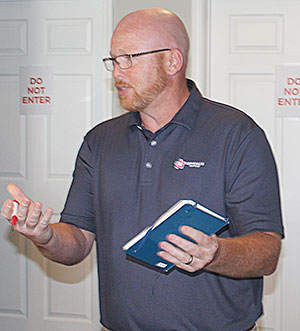 REPUBLIC SERVICES – Chad Brown, contract manager with Republic Services got an earful from the mayor, board and citizens for not providing bulk trash pickup in a timely manner. Brown took down address and street names where trash was not being attended to properly. He assured the city board that Republic would get caught up and stay caught up with bulk trash pickup.

“The mayor and board have been under scrutiny from citizens not having their trash picked up,” Mayor Sikes said in a stern voice as discussion opened. “I wish we could do it ourselves but we can’t.”

“When I sign a contract, I will carry it out,” said Sikes. “Our citizens deserve better. My staff deserves better. We signed a 5-year, $5-million contract.”

After each statement Sikes said, McCullough uttered, “I agree.”

Sikes said most of the complaints coming to city hall are not for residential pickup but for bulk (street side) that has been sitting there for weeks.

McCullough said Republic services (residential) carts every week but when storms come along, bulk may take longer to be picked up due the amount. He also made note of some residents clearing their property needing three or more loads. That can take an entire day to service one house, traveling back and forth, McCullough said.

“One excuse was a broken down truck,” Mayor Sikes stated. “We’re paying you $5-million—fix it! This contract is not being fulfilled.”

City Treasurer Kim Hadley disagreed with the statement that residential pickup is done every week. He said the city has a list of people complaining that carts have not been picked up since April.

It’s horrible,” Humboldt City Clerk Marquita Patterson said of Republic’s service. “On a daily basis we answer complaints. We have to ask Humboldt Utilities to credit their accounts for not having their trash picked up.”

Citizen’s trash pickup bill is included on their utility bill.

Patterson printed out several emails from citizens complaining about trash pick up. She flipped through them during the board meeting, reading the street names of those residences.

“This is what my staff deals with on a daily basis,” Sikes added. “They start blaming our staff.”

Sikes gave an example of bulk not being picked up for the week, saying a house on 28th has a pile to be picked up and grass is growing up as high as the pile.

“You go down 30th Ave., junk has been piled up for weeks.” Alderman Don Graves added. “That’s one of the main thoroughfares.” 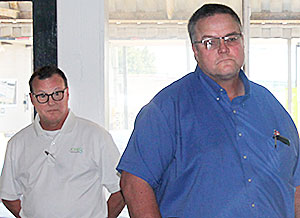 ANSWERS QUESTIONS – Republic Services operations manager Mac McCullough attended the city board meeting last week at the request of Mayor Marvin Sikes regarding the lack of service Humboldt is receiving for trash pickup. Humboldt citizen Ralph Jones III (back, left) was among those who had questions and complaints about their services.

Several times during the discussion, McCullough used the phrase, “Not to make excuses” only to make an excuse of why Republic was not adhering to the contract. One legitimate excuse was due to COVID and the container manufacturers shutting down. Republic could not purchase new residential trash bins. It was noted that Republic’s drivers do not use care when emptying the carts, often times dropping them, breaking the wheels or even ripping the lids off the containers.

McCullough agreed they had not been accountable to Humboldt and the citizens.

Humboldt resident Ralph Jones III asked if the contract had any penalty clauses, to which Mayor Sikes said, “No!”

“Are you willing to add clauses?” Jones then asked Brown and McCullough. “There’s no accountability without a penalty.”

Other citizens voice their concerns and complaints regarding trash pickup.

McCullough assured the mayor, board and citizens that Republic will remedy the problems. He noted they could not pick up bulk trash in one week using one truck and would be sending another truck to help. He said Republic’s newest truck in their fleet only runs in Humboldt. McCullough also said their best driver, who left for another job, is coming back and will run Humboldt’s route. He called the driver a “rock star” and is glad he’s coming back.

Sikes knew which driver McCullough was talking about and agreed he is an excellent driver.

“We’re going to get it fixed,” McCullough said of picking up the backlog of bulk trash.

“We’ve got to get our city cleaned up,” Mayor Sikes said.

I’m asking this board to give Republic 30 days,” board member Leon McNeal said. “If they’re not doing what they say, terminate the contract.”

City code enforcement officer Jeanna Harris, who works closely with Republic for the city, posed the question to McNeal, “If you cancel (the contract), what’s going to happen (for the city’s trash pick up)?

Before terminating the contract, Sikes said the city must go the legal route. City attorney Randy Camp will look over the contract. Sikes said he should have some answers at the next board meeting.

As discussion ended and the meeting adjourned, one thing was for sure—Brown and McCullough knew exactly how the mayor and city board, and the citizens felt about the lack of service Republic has offered over the past several months.