Former Milan Bulldog right handed pitcher Griffin Miller has come a long way since his time playing for the Diamond Dogs in the class of 2018.

After two seasons playing for Dyersburg State Community College, Miller, 21, is playing in the Major League Baseball Draft League this summer.  If his name is called in the MLB Draft July 11-13, his life could have an immediate and drastic change.  But even if he isn’t selected in the competitive draft, he’s committed to play for the University of Oklahoma this fall.

Miller (6-4, 210) plays for the State College Spikes in State College, Pennsylvania.  They play their home games at Medlar Field on the campus of Penn State University but routinely travel to the five other teams in the league located in New Jersey, Ohio, West Virginia, Maryland and Williamsport, Pennsylvania.

Top prospects make it to the Draft League by invitation only.  Miller says it’s by luck and the grace of God he’s getting his chance to live out his childhood dream.

“To be honest, I got here by keeping my faith in the good Lord,” Miller said.  “It took a lot of luck and a lot of prayer.  After COVID hit things weren’t really going my way, and I had a lot of uncertainty and doubt.  I wasn’t getting much attention at Dyersburg State, and there wasn’t much time left in the season.  I put everything in God’s hands, relied on my faith and then things started to fall my way.  Oklahoma reached out to me and made me an offer so I committed.  Then the Draft League was formed and they offered me a two-week contract to come play.  I got up here and turned a few heads and they extended my contract through the end of the season,” he said.

The Draft League plays a grueling 68 game schedule over just 82 days.  The players get Mondays off but will get a six-day break for the MLB draft from July 9-14.  Miller says he’s enjoying the grind that is much like professional baseball.

“It’s a pretty chaotic experience but it’s super fun and a great experience,” Miller noted.  “Most of our coaches are former major leaguers, and according to them, this league is about as close to professional baseball as you can get.  It’s very professional; we have a dress code.  We play every day but Monday—but even then I’m going in to do some throwing.  We travel a lot to play series against the other teams.  If we’re playing in Ohio, we might not get off the bus until 3 or 4 in the morning and then you do it all over again.  But they take really good care of us.  We’re fed very well and have a nice hotel to stay in.  You get into a routine and get close to the guys around you.”

Since his playing days in high school and college, Miller’s skill set as well as his physique, have changed quite a bit.  He’s grown three inches and gained about 55 pounds. And his fastball is now reaching upwards to 97 MPH.

Miller has earned a starting role in the College Spikes 5-man pitching rotation.  He starts every sixth day, usually Wednesday, and has compiled a 5.14 ERA with 27 strike outs and no homeruns.

To stay in the league and reach his goals, Miller is constantly working on his craft.

“I’m constantly working on my mechanics and we get to see every possible metric with all the technology we’ve got,” explained Miller, who routinely stays up until 3 or 4 in the morning breaking down his game films pitch by pitch.  “My pitching coach played in the majors, and I’m gaining a lot of wisdom from him.  They’ve taught me how to see swings and I’m learning how to tunnel my stuff.  They’ve helped me improve on what comes naturally to me and my pitches have more movement than they ever have.  A lot of this is about how bad you want it.  I’ve worked my whole life for this moment,” he added.

Miller plans to make the 13 hour drive home to be with his family for the draft, which gives 612 players to an opportunity to be selected over 20 rounds.

“Some of the advisors have told me I could be drafted pretty high,” added Miller.  “I’ve talked to 22 teams through texts, questionnaires, a MLB prospect link and phone calls.  The Texas Rangers told me I could go in the fifth round but it’s pretty unpredictable.  A couple of teams have offered me free agent contracts that I turned down.  I’ve got a good feeling that I’ll get a chance.  It’s another one of those things you just have to put in God’s hands and hope it works out.”

No matter what happens during the draft, Miller knows his future in baseball is still one to look forward to.

“If I get drafted, I’ll talk with my advisor and my family and make a decision at that time,” he said.  “I’ll weigh my options about going into the league or playing for Oklahoma.  It kind of depends on how bad you want to go (into MLB).  If they advise me to come back and finish out the draft league, that’s what I’ll do.”

Along with his strong Christian faith, Griffin also credits his mother and sister for helping him get where he is today.

Stacy Miller is CEO and president at the Tennessee Correctional Services in West Tennessee.  His sister, 1st Lt. Anna Pinkerton Cagle, is a UEWR crew commander at the 7th Space Warning Squadron (7SWS), Beale AFB, CA. and a software developer for the United States Space Force. 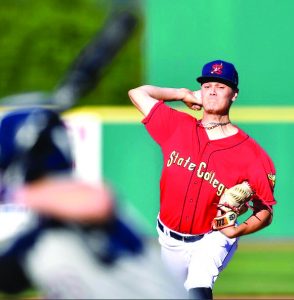 MILAN’S GRIFFIN MILLER, 21, is playing baseball in the Major League Baseball Draft League this summer. If his name is called in the MLB Draft July 11-13, his life could have an immediate and drastic change. But even if he isn’t selected in the competitive draft, he’s committed to play for the University of Oklahoma this fall. Photo submitted.