STUDENTS ATTEND CEREMONY – A busload of Humboldt students traveled to Jackson, Tenn. last Tuesday to celebrate a milestone in aviation history. A special program was held at McKellar-Sipes Regional Airport to honor the 100th anniversary of Bessie Coleman receiving her International Pilot’s License. She was the first African America female to ever earn a pilot’s license. Also, local African American pilot, the late Eugene May from Jackson, was recognized by having his FAA Wright Brother’s Master Pilot Award unveiled during the ceremony and will be archived at the airport. May had close ties to Humboldt where he often kept his “aeroplane” at the Gibson County and Humboldt airports.

Two pilots were honored for being pioneers in the aviation field last Tuesday in Jackson, Tenn. McKellar-Sipes Regional Airport hosted a program marking the 100th year when Bessie Coleman became the first African American female to earn an international pilot’s license. The Memphis Blackhawks and Team Memphis also partnered in the celebration, honoring those who dared to fly. 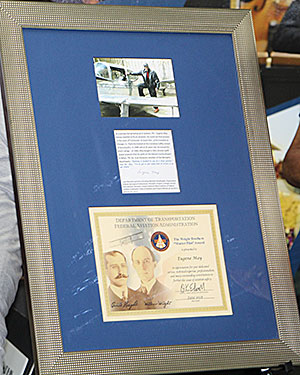 FLIGHT AWARD – This frame memorial of the late pilot, Eugene May, was unveiled during a ceremony held at McKellar-Sipes Airport in Jackson last Tuesday. May is pictured with his prize “aeroplane” along with his Wright Brothers Master Pilot Award bestowed upon him in 2018.

A local trailblazer, Eugene May, was also honored during the ceremony. May was a native of Jackson but had close ties to Gibson County, where he kept his “aeroplane” as he called it.

According to a press release, Bessie Coleman earned her international pilot’s license in France on June 15, 1921. This was the 100th anniversary of her historic endeavor. She was an entrepreneur with in indomitable spirit who wanted to show others that they could fly too.

Eugene May, a native of Jackson, was unable find anyone in the south that would teach him to fly. He refused to be deterred and made
his way to Chicago and in 1948 received his pilot’s license. He purchased a 1951 chrome Swift Globe aircraft and traveled all over the U.S. In 2017, the Memphis Blackhawks made him an honorary member. With their support and also Team Memphis, May was bestowed the prestigious FAA Wright Brother’s Master Pilot Award in 2018, recognizing his 50-plus years of professional and safe flying experience. He passed in 2019. Mays’ award was unveiled during Tuesday’s ceremony and will remain archived at the Jackson airport for all to see.

Steve Smith, executive director of McKellar-Sipes Regional Airport, spoke very highly of May, who he called a good friend.

Humboldt Fire Chief Chester Owens was also involved with the celebration. Owens is an accomplished pilot in his own right. He keeps his airplane at Humboldt Municipal Airport.

To mark this day in history on the 100th anniversary of Coleman earning her license, a schoolbus full of Humboldt students treked to Jackson to attend the celebration. 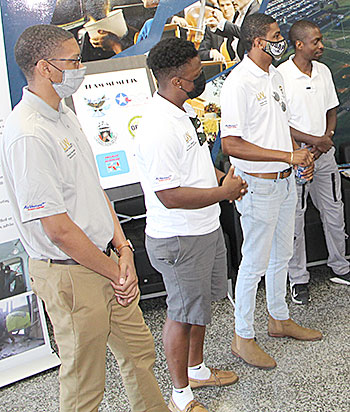 Student pilots from Lt. Col. Luke Weathers Flight Academy, along with Memphis Blackhawks Chief Pilot Billy Shannon flew in from Olive Branch, Miss. to be part of the eventful day. They were recognized during the program.

“We are honored to be a part of this special day recognizing two of America’s aviation pioneers, local hero Eugene May and international aviatrix Bessie Coleman,” Smith said in a statement. “We take time to remember these Americans because of the struggles they overcame to realize their dream of flight. Their accomplishments are examples to young people around the world that dreams can come true.”

“We believe that it is of paramount importance that we preserve the legacy of these pioneers and we are elated to remember both of these legacy pilots,” said Sharon C. Shaw, acting president of the Memphis Blackhawks. “Both had to travel to other places to fulfill their dreams of flying an “aeroplane”. The Blackhawks continue in the spirit of our late President, Mr. Morris Brown, by serving our communities and helping to build tomorrow’s leaders.”

Others spoke during the occasion and most acknowledged the students and youth attending the ceremony. They were encouraged to seek their dreams and if flying an airplane is their dream, these trailblazing African American pioneers led the way many years ago.