BUDGET DISCUSSION – The Humboldt Board of Mayor and Aldermen passed the first reading of an ordinance to adopt the city’s 2021-22 fiscal year budget. Mayor Marvin Sikes noted the property tax rate remained the same again this year. A second reading must be held before the budget is approved.

With June 30, 2021 looming, the end of the city’s fiscal year, the Humboldt Board of Mayor and Aldermen approved the budget for the upcoming year. Monday, June 14, board members passed the first reading of Ordinance 2021-02, adopting the fiscal year 2021-22 budget for the city of Humboldt.

Mayor Marvin Sikes said this is a balanced budget and has been for the past eight years. Sikes also noted that the property tax rate remains the same at $2.7297 per $100 of accessed value.

Mayor Sikes praised all of the department heads for keeping within their respective budgets for the current year and for the input each one had in developing next year’s budget.

The board voted 4-0 to approve the first reading of the budget ordinance. Alderman Don Graves was unable to attend the meeting. A second reading of the ordinance must be approved before the city’s 2021-22 budget is adopted.

The board also approved Ordinance 2021-03, which amends the 2020-21 city budget. City Treasurer Kim Hadley, who is instrumental in developing the city’s budget, could not attend the board meeting due to the elevator being out at the Municipal Building. But Mayor Sikes had Hadley on the phone so he could answer any questions from the board.

The first reading of the ordinance was approved and like all city ordinances requires a second reading before final approval.

•The board approved the second reading of Ordinance 2021-1, rezoning property near the intersection of Hwy 45 Bypass and Bledsoe Rd. from B-2 general business to R-3 high density residential. The first reading was approved during the board’s May 23 meeting.

The property owners, Tennessee Baptist Adult Homes, requested the rezoning to develop a retirement community for retired Southern Baptist preachers. The development would include duplex apartments on the site as well as a community building.

A public hearing on the ordinance was held prior to last Monday’s meeting. Mayor Sikes opened the floor for discussion. Seth Wilkerson, pastor of Harvest Church whose property adjoins the proposed rezoned property, had a few questions. He asked what had changed with the property from when it was purchased up to now.

Russell Norville, representing TBAH said the organization purchased the property with the intent of creating the retirement village.

Wilkerson asked what vegetation would be allowed. His concern was having overgrown bushes impeding visibility. He said the current fencerow used to be bushes but are now trees.

City inspector Mike Uselton said there are different types of plantings the city allows but assured Wilkerson it would not impede visibility of the church property.

The mayor asked Wilkerson if he wanted the fencerow cleaned up.

Wilkerson said he did want it cleaned up. He then asked how the proposed rezoned property would be maintained.

Norville said TBAH would maintain the property. He also addressed the overgrown fence and said he wasn’t sure which part was TBAH’s and which part belonged to the church but it would be cleaned up.

Norville said both Harvest Church and TBAH want the property to look nice.

Mayor Sikes asked if there were any more questions before closing the public hearing. Wilkerson said his concerns had been answered. The mayor said he believes the retirement community and the church will be good neighbors.

•Police Chief Reynard Buchanan submitted a letter of recommendation to hire Zachary Estes as a Humboldt police officer. In the letter, Chief Buchanan noted Estes had passed a drug test and had met all requirements of the state. Buchanan said Estes had been a Humboldt policeman for three years in the past and left the department on good standing and would be eligible for rehire.

Mayor Sikes said Estes was a good officer for the city before and thanked him for wanting to come back to the Humboldt police force. In jest, but actually serious, Sikes asked Estes to stay a little longer this time around.

Chief Buchanan was asked how many officers the police department was down after this hire. Buchanan said HPD is down three at the moment and that one is training to be the K-9 officer.

The board unanimously rehired officer Estes. 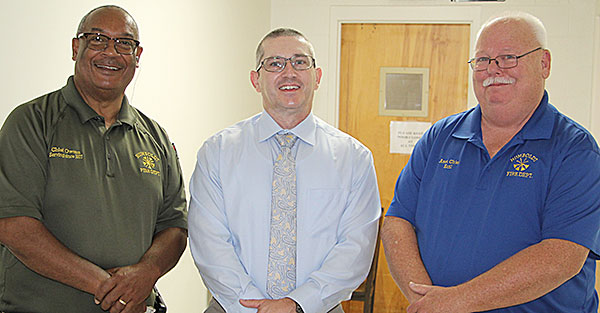 When the board asked the prospective fire fighters to approach the board, only Cooper was in attendance. Assistant Chief Leroy Kail told the board that he attempted to contact Hensley but he could not be reached. Kail did leave him a voice mail but said he had not heard anything from Hensley.

The board then discussed if the motion should be to hire one fireman or two. Mayor Sikes suggested the board keep the agenda the same and hire two.

Board member Leon McNeal said the respective hires do not have to attend the meeting. The mayor agreed with McNeal. It is a courtesy to the board that potential new hires attend the city board meeting.

The board approved hiring both Cooper and Hensley. It was suggested Hensley could attend the next city board meeting so board members could meet him.

•The board unanimously approved a beer permit application for Tammie Porter. The permit is for on-site consumption at The Entertainment Complex. Porter’s father, Thomas ‘Red’ Porter, had a license in his name but recently passed away.

McNeal said the complex had been in business for a long time and Ms. Porter helped her father run the establishment.