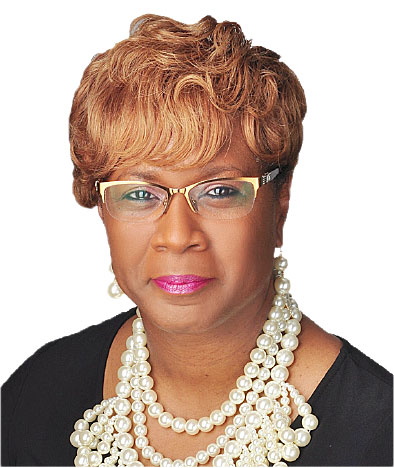 JOB OFFER – The Humboldt School Board unanimously voted to offer Dr. Janice Epperson the position of superintendent for Humboldt City Schools. The board also developed a salary package for the new superintendent. Board member Leon McNeal was very vocal during the selection portion of the meeting, praising Dr. Epperson and even did a little happy dance a couple of times after the board voted unanimously to offer her the job.

Humboldt City Schools has selected their new leader. The Humboldt School Board, under a united front last Monday evening, voted for the new superintendent. Dr. Janice Epperson was their unanimous candidate for the job.

Board member Leon McNeal led the discussion and said he hoped and prayed to have unity from the entire board when selecting the next superintendent of schools. McNeal then stood up and called each board member by name and said he casts his vote for Dr. Janice Marie Epperson.

McNeal said he thinks she is the best candidate for Humboldt schools. He noted Epperson was born and raised in Humboldt. McNeal said she knows these kids and the backwoods of Humboldt.

Board chair Valeria Wedley said she too supported Dr. Epperson and has known her for a long time. Wedley said she knew ‘Re’ Epperson really far back. But when Epperson interviewed for the superintendent’s position, Wedley said she met “Dr. Janice Epperson” and was very proud of the way she handled herself and rose above the other candidates.

Wedley announced the procedure the board would use to cast their vote. Chair Wedley said each board member should write down the name and turn them into board secretary, Cindy Love. Wedley asked Love to read aloud each ballot with the board member’s name and the person they voted for to be superintendent.

Love read the ballots one by one, with each board member, Terry Johnson, Wayne McLemore, Mark Hodge, Wedley and McNeal voting for Dr. Epperson. 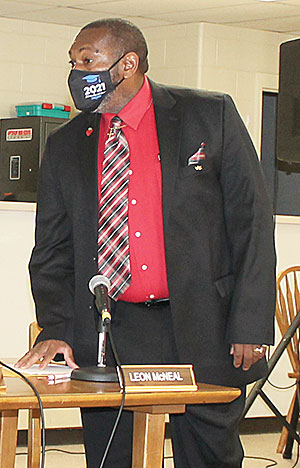 UNITY – School board member Leon McNeal stands up during the meeting, touting a unified board with the 5-0 vote selecting Dr. Janice Epperson as superintendent.

When the votes were read, McNeal stood up with excitement and shouted, “Yes, we got that 5-0!”

He noted Humboldt is unified. He said, “This sends a message everybody, Milan, Trenton, Medina, North Gibson County, Crockett County that Humboldt City Board is unified and moving forward.”

In his exuberance, McNeal jumped up and down, and did a little dance, then took his seat.

Wedley tried to calm him down and return to running the meeting, but McNeal thanked each board member by name, and then thanked God for the 5-0 vote. McNeal then stood back up and did another little happy dance before returning to his seat.

Wedley then moved the meeting forward to the next agenda item, discussion on the superintendent’s salary and benefits package. Board members had a contract that had been used as a model for many years. McNeal said it was a good contract but he also wanted it to be fair, noting Dr. Epperson would be moving 1,200 miles back to Humboldt.

Hodge addressed the board, noting the contract was a “base” contract. He suggested offering a four-year contract instead of the three-year contract. Hodge said he thinks it might take longer than three years to fix, “all the stuff” that’s been going on. Hodge said this would feel more permanent for those coming into the school system.

The last addition to the contract Hodge requested was a bonus system tied to the superintendent’s evaluation. Hodge said there are nine questions on the evaluation model, which is too many for the bonus system. He said it could be narrowed down to five criteria—board relations, staff relations—and tie a $2,000 to each of those criteria. Hodge said that would be a possible $10,000 bonus per year.

Hodge believes this would be a good starting point for negotiations with Dr. Epperson’s contract. He said the base salary plus car allowance and bonus opportunities would come in around $133,000 per year.

Johnson said he liked Hodge’s bonus plan but instead of a four-year contract, he suggested even longer at five years.

McNeal offered some other figures that play into the contract for extra training, career ladder of $3,000, paying 100-percent of her insurance and retirement. McNeal said with the benefits package, that brings the salary in the neighborhood of $170,000 to $180,000 per year.

Chair Wedley asked McLemore’s opinion since he had not added anything to the discussion. McLemore said he was not going to argue about money because all that will be worked out in time. He did make a request to the board and the board only, to read item 11 multiple times. McLemore said he was not pointing a finger at any board member but it was perhaps as important as the money being discussed for the superintendent’s salary.

Wedley said that is what the board should do; put the school system in the hands of the person running the schools.

Wedley came back to salary discussion. She said she disagreed with Hodge’s numbers. Based on the previous salary from six years ago, with the 2-percent raise included each year, which would bring the base salary up to $121,000 instead of Hodge’s suggestion of $115,000. Wedley fully supported the car allowance, training and benefits package discussed.

Wedley noted if Dr. Epperson does accept the superintendent’s position, she would need relocation funds. Wedley said moving from Connecticut to Humboldt would be expensive and suggested offering $4,000 for relocation expenses.

Hodge questioned if $4,000 would be enough and Johnson seemed to agree, suggesting raising the relocation number to $5,000.
McNeal asked where the board was with the salary numbers since several options had been laid out.

Hodge said the salary package he suggested might be lower than others but it gives the board a little wiggle room during negotiations. He also noted the board had not approved the school system’s budget for the upcoming year. Hodge said he wants to offer an attractive package to the superintendent but the board must be mindful and operate within their means.

After going over everyone’s salary numbers and coming to a compromise agreement, the board voted on a base salary of $133,500 that includes $10,000 car allowance, plus adding the benefits of insurance, retirement, training and career ladder.

Wedley made the motion to allow herself as chair of the school board and the board’s attorney enter into contract discussion with Dr. Epperson. The board unanimously approved the vote. 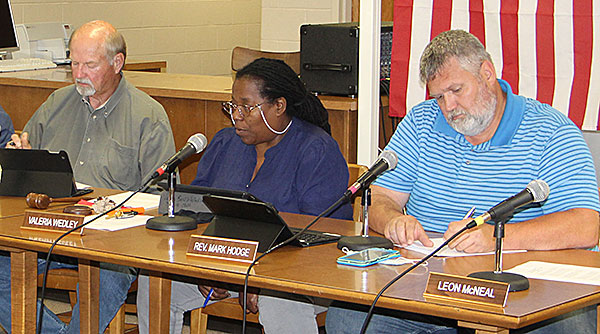 SALARY UPDATES – After the school board voted to offer the superintendent position to Dr. Janice Epperson and worked up a contract Monday evening, the board had to make a few changes during Thursday night’s regular meeting. Board attorney Chuck Cagle advised the board of the changes. Perhaps the main change was the length of the contract from five, which is not allowed by the state, to four years, the maximum length a school superintendent contract may be offered. Board members Wayne McLemore (from left) chair Valeria Wedley and Mark Hodge read over the updates to the contract.

With Dr. Janice Epperson being the Humboldt School Board’s unanimous selection to lead Humboldt City Schools as superintendent, the board needed to approve a few changes in the contract that had just been approved earlier in the week on Monday evening. Monday the board discussed the contract, including salary and benefits, to be offered to Dr. Epperson.

During Thursday evening’s board meeting, board chair Valeria Wedley requested the school board amend the agenda by adding corrections to the superintendent’s contract. Wedley said the corrections were at the request of the board’s attorney, Chuck Cagle.

The board unanimously approved the amended agenda with a 4-0 vote. School board member Leon McNeal was unable to attend the meeting Thursday night.

One correction to the contract was to change the base salary from $133,500 to $123,500 and remove the $10,000 car allowance from the salary into its own line item. This was simply a clerical change and did not affect the overall salary being offered.

Another change in the contract dealt with the relocation package the board approved. The board originally offered $5,000 but attorney Cagle changed the wording to “up to $5,000” instead of a set price. It was noted Dr. Epperson would need to keep moving expense receipts.

The biggest change in the original contract was the length. The board approved a 5-year contract only to find out later that the state allows superintendent contracts up to four years. The board had to change the contract’s length to four years to be in accordance with state law. Wedley noted that the board still has the option to extend the contract at any time.

“According to our vote tonight, this is what we will present to Dr. Epperson,” Wedley instructed the board.
Board member Mark Hodge motioned to approve the changes in the superintendent’s contract, which was seconded by Wayne McLemore. The new contract to be presented to Dr. Epperson was approved unanimously.

•Interim superintendent Lillian Shelton presented another teacher recommendation for tenure. Shelton said Adrian Ingram met all the qualifications for tenure. Shelton and HJSHS principal, Carla Brown, went back through Ingram’s files and saw he should be recommended for tenure.
The board voted 4-0 to give Ingram tenure.

•The board approved the consolidation application for the fiscal year 2022. Each year, the school board must approve the application in order to receive certain government funds and grants.

•During the superintendent’s report, Shelton announced that all certified teachers would receive a 2-percent salary increase through the state. Shelton said this would average around $500 more to their yearly salaries.

McLemore asked Shelton about the big bonuses for teachers and staff that had been discussed over the past few months.

Shelton said they submitted the paperwork with the state earlier that day before the school board meeting and noted Humboldt City Schools was fourth in line for approval. She praised central office’s Jennifer Roten and Michelle Lewis for all their hard work with the application request.

McLemore asked if the bonuses would be retroactive to the current school year.

Roten, who was in attendance, said they had filed for funds in this school year and that was their goal.

Also during Shelton’s report, she announced that online registration for the 2021-22 school year begins July 1. She said this is the first time the school system is totally going to online registration. Shelton suggested students and parents contact their respective schools if they need assistance. Shelton said about half of the high school students, grades 9-12, have already registered.

Shelton said the school system was approved for a $24,000 grant for transportation for summer school students. Funds will go toward fuel and pay for bus drivers.