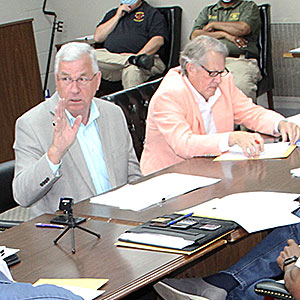 Humboldt may have a new residential development coming. The Humboldt City Board took the first step that would allow for the new development during their May 24 meeting.

Tennessee Baptist Adult Homes owns property at the corner of Hwy 45 Bypass and Bledsoe Rd. They want to build a retirement community for retired Southern Baptist ministers. The property would need to be rezoned from B-2 general business to R-3 high density residential.

Sikes asked Norville to explain the plans for the property. Norville, who works for Civil Engineering Solutions in Dyersburg, Tenn., said he represents Tennessee Baptist Adult Homes. He said TBAH has owned the property for years and had plans to one day develop the property as a retirement community for retired Southern Baptist ministers. The community would consist of duplex units.

The property already has a building that was once a funeral home and is currently being leased as a church. Norville said Phase I would be to build two units. The master plan calls for 11 duplexes, removing the current building to create a clubhouse type facility to use for social events and reworking the road.

Norville said the group began the project in Davidson County using a condominium facility. Their second development was in Johnson City, Tenn. and is similar to the plans for Humboldt. Johnson City has 20 or more duplex units.

Norville said TBAH has facilities in East Tennessee, Middle Tennessee and wants to expand into West Tennessee in Humboldt. He noted that a trust was set up to construct the homes.

Bunton also addressed the board and said the Humboldt Planning Commission recommended rezoning the property. He noted that adjoining property was also zoned R-3 high density and would be a natural fit. The property does not adjoin any low-density residential zoned property. There are two properties, one zoned M-1 for a church and another B-2 that could be commercial development on the corner of the bypass and Bledsoe.

Bunton noted if the board approves rezoning the property, a site plan would need to be approved, as would landscaping to create a buffer zone between the proposed retirement community and the church.

•The board unanimously approved Resolution 2021-01. The resolution allows the city to contract with the Tennessee Department of Transportation for assistance in construction and completion of a proposed road inside the Gibson County Industrial Park.

The proposed road would connect with the cul-de-sac at Tyson Blvd., and run to the back-side of the park to the railroad tracks.

Alderman Bob Pruett asked how much the road would cost the city, to which Mayor Sikes said, “Nothing” and he added the state would fund the road construction project. Once the road is completed, the city will have to maintain it.

•The board approved a paving bid for Rosehill Cemetery. The mayor said the city received one bid from Martin Paving Company for $18,480.
Pruett asked which parts would be paved. Pruett said the back part looks great and lauded the mayor and city.

Mayor Sikes said he a Humboldt Public Works Supervisor Willie Reed drove around the entire cemetery and found 11 places in bad need of repairs. Sikes said there is $11,000 in the current budget to go toward the paving project.

•Humboldt firefighter Daniel Knowles submitted his resignation from the Humboldt Fire Department. In his letter of resignation that was presented during the meeting, Knowles said he was leaving HFD with no malice towards the department and thanked the city for the opportunity.

Assistant Chief Leroy Kail said Knowles is working for the Milan Fire Department, which has an EMT program.

Alderman James Shivers asked the board and mayor if something can be done about the pay.
Graves agreed with Shivers’ request, saying the city loses a lot of policemen and firemen.

Fire Chief Chester Owens addressed the board regarding the resignation. He said fire fighters get trained to be first responders and Milan has a first responder program.

As more discussion continued, Mayor Sikes got things back on track, dealing with the resignation. He said this was not the time or place to debate having an EMT or first responder program.

The resignation was approved.

•Linda Hawks submitted her resignation from the Humboldt Public Library Board. Hawks stated in her letter that it had been a privilege serving in this position for several years but it was time to move on.

Hawks said she will continue to use the library and that the future of the library is definitely bright.

Mayor Sikes and the board agreed Hawks was a good library board member and will be missed.

•Mayor Sikes presented a recommendation to appoint Emily Lovings to a 3-year term on the library board. Sikes said this position would replace the seat previously held by John Blankenship who resigned after being named library director earlier this year.

There will still be one vacant seat with Hawks’ resignation.

The board approved Lovings as a new Humboldt Public Library Board member.