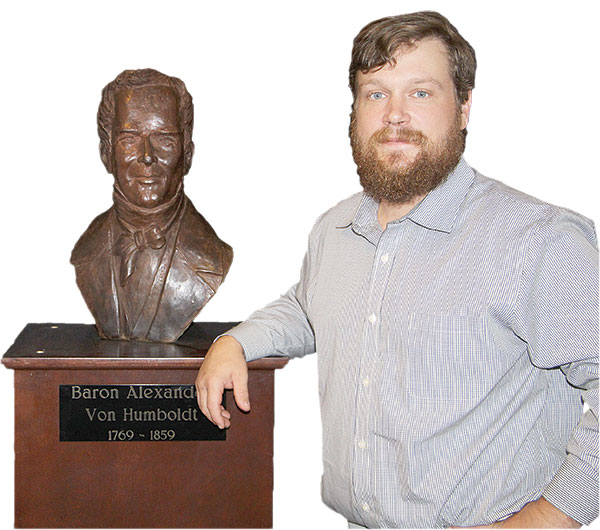 NEW MUSEUM CURATOR – Trey Lynch was recently hired as curator of the Humboldt Strawberry Festival Historical Museum. During his first few days, Lynch has been inventorying items and digging through numerous historical artifacts of Humboldt history. One prominent piece in the museum is this bronze bust of Baron Von Humboldt, to which Humboldt is named after even though Von Humboldt never visited the town.

For those who think Trey Lynch is somewhat a history buff, they would be correct. Now, he has a job that fits his love for history. He is the new curator for the Humboldt Strawberry Festival Historical Museum.

The museum is located on the main floor of the former city hall building on Main St., next to the fire station. The building is also home of the Humboldt Chamber of Commerce office and the West Tennessee Regional Art Center.

Lynch said the museum is basically two in one—Humboldt history and Strawberry Festival history as well. During his first several days, he’s going through the museum with a fine toothcomb to discover all the hidden treasures of Humboldt’s long history.

Lynch’s first day was May 1 after the museum’s board of directors and trustees selected him for the vacant position, previously held by John Blankenship. Blankenship resigned when he was hired as the Humboldt Public Library director.

“I’ve been doing an inventory of what we have,” Lynch said of his first tasks as director. “I plan to rotate items in and out regularly, every few months to keep it fresh.”

The museum’s visitor space is limited, so many historical items are stored in closets and in the basement of the former city hall building.

Lynch gets his love for history honestly. His dad, Shane Lynch, was a history teacher for many years. His mom, Libby Lynch, was curator for the art center for a while and also taught summer art classes for kids in the building. As a young lad, Lynch would be in the building while his mom taught summer classes. He would spend time the museum and chat with curator John Lewis.

As the son of a history teacher, Lynch was often the test audience for his dad’s practice lectures for his classroom at school. Lynch got history lessons from his father’s practice sessions often.

Lynch’s ancestry has ties Humboldt history. He is a direct descendant of Humboldt’s first mayor, Moses Senter, on his mother’s side of the family. With all his access to history and the museum, Lynch is a perfect candidate for museum curator.

He is also a member of a national non-profit organization, Facing History and Ourselves. This is a group that assists educators, especially when focusing on history that some teachers feel uncomfortable teaching, such as the Holocaust or Civil Rights. Lynch said he wants to visit the schools as an ambassador with methods to help teachers and students.

These first few weeks on the job as curator, Lynch has been like a kid in a candy store. There is so much history to uncover.

“It’s like I’m an archeologist seeing layers and layers through the years of directors,” Lynch explained of the documentations of historic pieces being added to the museum’s inventory. “I’ve seen signatures of John (Lewis), Janice Milligan, Mary Harrison, John Blankenship.”

One piece of history he found was the front page of the Courier-Chronicle for the very first Strawberry Festival.

Another item that peaked his interest were diaries of WWI General Flap Adams.

Of course, the bronze bust of Baron Von Humboldt is another favorite for Lynch.

“I found a dress, handmade, and very unique,” Lynch said. “It’s almost quilt-like, made of scraps of many fabrics. I can’t find a date for it.”

Another piece of newer history Lynch ran across were fire report logs for the Humboldt Fire Department from the 1960s. As a real estate appraiser, Lynch was intrigued and interested in reading documentation of various fire calls.

Lynch was born in Memphis but moved to Humboldt at the age of six. He was familiar with Humboldt from visits with his grandparents before the move. He attended USJ in Jackson, Tenn. where his parents taught. Lynch graduated from USJ in 2009.

After high school, Lynch attended UT Martin where he earned his degree in history with a minor in fine art. Now, Lynch is days away from completing his MBA from Bethel University.

Along the way, Lynch was in the National Guard in Trenton, Tenn. He served in Operation Enduring Freedom in the Middle East. His unit served in the headquarters for various brigades.

As a National Guard soldier, Lynch was sent to Bulgaria twice as part of humanitarian missions. He spent 12 years in the National Guard.

Lynch is married to Katie, who grew up in Pinson, Tenn. The two have known each other for years, ever since the fifth grade, through middle school, high school and college. They do not have any children other than two fur babies.