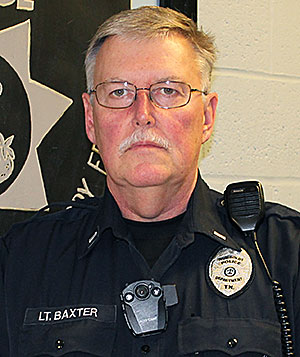 The Humboldt City Board had the ominous decision to make last Monday night regarding a long-time policeman. Lt. Curtis Baxter had been with the Humboldt Police Department since he was hired May 21, 1984.

“It is unfortunate that I have to recommend the termination of Lt. Curtis R. Baxter,” Chief Buchanan’s letter stated. “As you know, Lt. Baxter has experienced work-related health issues that has prevented him from returning to full duty, as he is required to do. Allowing Lt. Baxter to return to work in his current condition would create a greater liability for the city.”

Lt. Baxter’s was released from workers comp in December 2020 and had used up the remainder of his available leave, which ran out March 3, 2021. In his letter, Chief Buchanan stated he had spoken with Lt. Baxter on several occasions about the matter, where Baxter said he has legal representation.

“I have received guidance from our city attorney and I have also looked through our city’s personnel policy manual and department’s policy manual to make sure we afford Lt. Baxter all the resources and accommodations possible,” as stated in the letter. “I spoke to Lt. Baxter as recent as February 8th, at which time I advised him that he will run out of available leave on March 3rd and that he would need to contact me by that date if he has changed his mind to ‘retire’ in good standing. I have not heard from Lt. Baxter since February 8th.”

Lt. Baxter is receiving eight hours of sick leave per month, holiday leave, and the city continues to pay for his insurance at a rate of $662 a month.

Chief Buchanan stated Lt. Baxter is making decisions that are in his best interest. As the head of the police department, Buchanan has to do what is best for the department.

McNeal asked to table the termination until they can meet with Baxter and let his attorney take the lead. No one seconded his motion to table, so discussion continued.

“This is very sensitive. I don’t take pleasure in doing these types of things,” Mayor Marvin Sikes said. “I would like to hear the board’s thoughts on this. The city and police department need closure. He (Lt. Baxter) needs closure so he can move forward.”

“Curtis has served well and done a good job for the police department,” Alderman Don Graves lamented. “We need to move forward. He’s had ample time to approach this, to remedy this.”

Alderman Bob Pruett asked city attorney Randy Camp if he had spoken to Chief Buchanan on this matter.
“I’ve talked with the chief many times,” Camp answered. “I see no other recommendation.”

McNeal said the board should follow the advice of their attorney.

Mayor Sikes agreed but noted he is not comfortable in these type situations.

The board voted 4-0 to terminate Lt. Baxter. Alderman James Shivers was not present during the meeting.

With Baxter’s termination, it left a void in the chain of command within the police department.

Chief Buchanan submitted his recommendation to promote Sgt. Chris Moore to lieutenant. The chief stated Moore has almost seven years with the Humboldt Police Department and has done a good job as a patrol sergeant. This promotion would continue his leadership role in the patrol division.

The board unanimously approved Chief Buchanan’s recommendation to promote Moore to the rank of lieutenant.

OFFICERS PROMOTED – During the March 22 Humboldt City Board meeting, two officers were promoted. Chief of Police Reynard Buchanan (from left) congratulates Chris Moore who was promoted to lieutenant and Reginald Fleming who was promoted to sergeant.

This promotion now left an open slot for sergeant within the police force. Chief Buchanan recommended patrolman Reginald Fleming be promoted to sergeant.

In his letter of recommendation to the board, Chief Buchanan noted Fleming had been with the Humboldt Police Department for two years but has four years experience in law enforcement in Tennessee. He said Fleming has leadership qualities and is willing to serve as a supervisor.

Wood said it was a clean audit but the city did have one finding dealing with a grant schedule. With the good audit, the city of Humboldt received the Governmental Finance Officers Association Certificate of Achievement for Excellence in Financial Reporting for the 13th consecutive year.

Mayor Sikes and the board commended city treasurer Kim Hadley for his hard work keeping accurate records for the city. Sikes then noted he and Hadley highly disagree with the one finding in the audit report. Hadley said this is the city’s first finding since 1999.

Wood noted this fiscal year was the most unusual audit year due to the pandemic. Overall, Wood said the city has been fiscally sound using tax dollars to operate the city.

The audit report was approved.

•Recently, the board approved rezoning a section of the Gibson County Industrial Park from light industrial to general business. This was done to open up commercial possibilities on the southern end of the industrial park.

Now, a company is interested in property in the park. The Fisher Project is looking at 35 plus acres in the park zoned industrial but needs an additional 30 acres, part of which was the recently rezoned property.

Humboldt Chamber of Commerce Amanda Love said Project Fisher wants the area on the industrial park’s entrance road. The road will need to be extended all the way to the railroad tracks near the back of the park. Utilities will also need to be extended. Love said she hopes Tennessee Department of Transportation will help with the road extension.

•The board approved the bid for replacing the roof on Fire Station #1 on Main St. Strickland Roofing Company located in Jackson, Tenn. submitted a bid of $35,043.

Scope of work includes removing and disposal of existing roof down to the decking and roof hatch; installing new hatch and two layers of insulation; 60 mil membrane; 24 gauge pre-finished metal; reflashing; install gutters and downspouts; 2-way vents; and remove all debris. The roof comes with a 20-year warranty.

•The board approved an application for a beer license to Eric Wayne Rector for Dollar General Store in Humboldt. The application had to be filed after the store moved into their new facilities (the former Fred’s Dollar Store building). The beer permit is for carry-out only.

Chief Buchanan’s recommended to approval of the beer permit after Rector’s record showed no driving or criminal violations, and had no outstanding warrants.