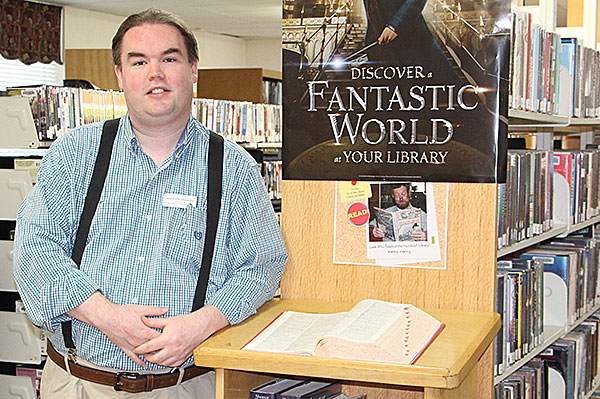 NEW LIBRARY DIRECTOR – John Blankenship recently accepted the position of library director at Humboldt Public Library. Blankenship invites everyone to visit the library to see that it is a lot more than checking out books.

Humboldt Public Library has a new director. John Blankenship was selected to be library director. As director, Blankenship’s duties will be to oversee all day-to-day operations.

Blankenship has a professional and qualified staff at the library. Joshua Fisher serves as assistant director. Blankenship said one of Fisher’s main roles is working with adult services offered through the library. Sarah Peden heads up the children’s and teens’ programs. Edna Sherron and Andrew Thurbush work in technical services and cataloging. They assist patrons with computers and digital media.

“Southern Gibson County is our service area,” Blankenship said. “It covers people from all walks of life, from all economic circumstances. Most people that use our services check out books or come here for computer access and printing.”

Sherron said the library served upwards of 600 to 700 patrons a week, pre-pandemic. Some weeks would be around 1,000 if there were Saturday and night programs. During the pandemic, the library served approximately 50 to 60 per day.

“We offer more than just books,” Blankenship said of the services offered at Humboldt Public Library. “We have free hi-speed internet inside the library and outside in the internet garden. We’re one of the few places that offers faxing and copying for the public. We do charge a small fee.”

The pandemic hindered some of their regular programs, especially the children’s programs. Those were held virtually using Facebook Live. This week, children’s programs will resume in person but will still be streamed for those unable to attend or those who are still skeptical of getting in crowds.

Many of the library patrons use the computers for various reasons. Some have filled out their taxes, some use it for research, and some have filed their weekly unemployment online.

Blankenship said the library offers several services that most people are unaware of such as genealogy, checking out DVD movies, microfilm of the Courier-Chronicle/Humboldt Chronicle from 1923 to current editions and some other documents on microfilm including some census records and marriage licenses. The library also has wi-fi hotspot drives that can be checked out on a weekly basis. This hotspot allows internet access for those who might not have it otherwise.

Blankenship was born and raised in Humboldt. He is a 2000 graduate of Humboldt High School.

He has 20 years experience in radio and is still in a partnership with a local radio station. Blankenship live feeds Humboldt City Board meetings and shares the live feed for Humboldt School Board meetings.

Since January of 2018, Blankenship has served as Gibson County’s official historian after Fred Culp passed away. The Gibson County Commission appointed Blankenship to the position. He also serves as Humboldt’s Historian, named by Mayor Marvin Sikes, who is a historian in his own right.

As library director, Blankenship is continuing with the vision of a new addition to the library, building a new children’s library wing at the rear of the current building. This vision, themed, “Breaking Ground in 2021” is still a work in progress through the Humboldt Public Library Foundation, a non-profit organization that supports the library.

Foundation chair Elna Blankenship said they have raised approximately $250,000 of the estimated $450,000 needed to construct the new library wing. Once the foundation reaches $300,000, they qualify for a $100,000 library grant through the state, which would get them very close to their goal. The pandemic slowed fundraising efforts but plans are ramping up to hit that benchmark and their final goal.

“What I enjoy most about my job is meeting and assisting a variety of people from all walks of life,” Blankenship added. “I love having conversations with them. We are an information center.”