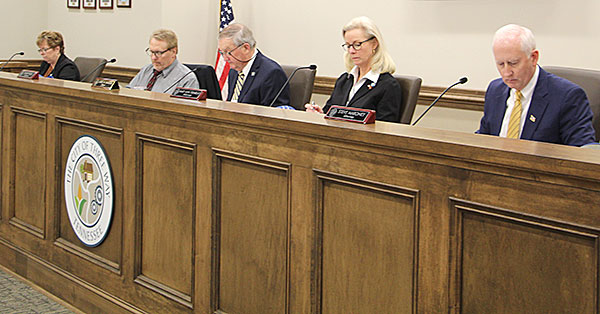 THREE WAY BOARD – After a few months of Zoom online board meetings, the Three Way Board of Mayor and Aldermen held the first in-person meeting of the year. City officials at attending the meeting are (from left) city recorder/treasurer Susan Rogers, Alderman Danny Wade, Mayor Larry Sanders, Alderlady Mary Ann Tremblay and city attorney Steve Maroney.

With the passing of former Three Way Mayor Jimmy Hill, city officials decided to do something to commemorate his legacy. Last week during the Three Way Board of Mayor and Aldermen, the board voted to make a donation to go toward a plaque in Mayor Hill’s honor.

Current Three Way Mayor Larry Sanders brought his recommendation to the board to make a donation to Madison County Fire Station #6. The fire station wants to have a memorial plaque made for Hill and his service to the city. Hill served as captain of Fire Station #6 for a number of years, Mayor Sanders noted. He and Hill were two of several members of the community that played a major role in purchasing the property where the fire station sits, and constructing the building.

“I feel like Jimmy’s service to the city needs to be recognized,” Mayor Sanders said. “We’ve made donations to the fire station, between $300 and $500 each year. I’d like to increase that amount in his memory.”

Alderlady Mary Ann Tremblay and Alderman Danny Wade were both in favor on increasing the city’s donation. Wade asked the mayor how much extra he was thinking, perhaps $800.

Mayor Sanders recommended the donation be $1,000, which the board unanimously approved.

In other board business:

Last week when the board received the bids, both were extremely close. Ford’s bid came in at $153,914 while Martin’s bid was for $154,925. Mayor Sanders double checked both bids to assure they were bidding the same specification, which they did.

The mayor also presented a sheet showing where funding for the spring project would be budgeted. The Governor’s Local Government Grant would be $67,000, 2020-21 General Fund Street Paving $60,000 and State Street Fund Street Paving $30,000. Mayor Sanders noted the bids came in roughly $50,000 less than estimated.

Alderman Wade asked if Ford Construction had done work for the city in the past. Mayor Sanders said they had, a couple of years ago. The mayor noted both companies had performed paving projects for the city and both were very good.

Alderlady Tremblay asked the mayor if he had a preference between the two. Mayor Sanders said both were very nice and knowledgeable. He noted with the bids so close ($1,000 difference), the board would be within its authority to select either company.

Wade motioned to approve the lowest bid from Ford Construction. Tremblay seconded and the motion passed.

The mayor asked the board if they thought the city could have done more. He said city hall received several calls asking why city streets were not cleared. Mayor Sanders said he told them the city does not have the manpower, or the equipment to clear streets. Plus, if the streets were cleared, that snow and ice would have made huge piles in yards and driveways that would have created an even worse driving situation.
The board thought clearing the major intersections at Hwy 45 was a good service to provide with the city’s limited resources.

•Several months ago, the city requested assistance from Tennessee Transportation Assistance Program (TTAP) and UT Municipal Technical Advisory Service (MTAS) to perform a speed and parking study on Three Way’s city streets. There have been citizen complaints of speeding on Turner Loop Rd. and Sanders Bluff Rd. for many years.

During last week’s meeting, Mayor Sanders submitted the report. Data from the report showed the majority of vehicles traveling above the speed limit was only 5-mph over. There were some instances of higher speeds with the highest speed clocked at 45 mph.

The study also recommended raising the speed limit to 35 mph on a portion of Turner Loop and Sanders Bluff.

Wade said he disagreed with the recommendation to increase the speed limits. Sanders and Tremblay agreed.

The study did not address parking in the street in Willow Ridge subdivision.

•Mayor Sanders updated the board on the installation of a 6 ft. black vinyl chain link fence on the back side of Pine Hill Park. Last month the board approved Quality Fence’s quote to install the fence. This was decided after the developer of the subdivision installed a sidewalk leading to the rear of the park, which does not have an entrance there.

The board’s issue with the sidewalk is that it invited bicycles and ATVs to the park, which are not allowed.

The fence will have a V-shaped pass through that will allow people to walk through but not bicycles or ATV.

After Mayor Sanders received the quote last month, the developer cleared off underbrush for more building lots, opening those lots direct access to the park. The mayor contacted Quality Fence to let them know more fencing would be needed. The new quote with the extra fence came in cheaper per foot than the original quote.

•The mayor gave an update on the removal of the billboard in front of the city hall. Lamar Signs returned Mayor Sanders’ call and said they will remove the billboard but due to weather, the crane company will not get a crane on the property until it dries out.

•The new security cameras have been installed at city hall for surveillance of the parking lots. Now the entire municipal complex is covered for security.