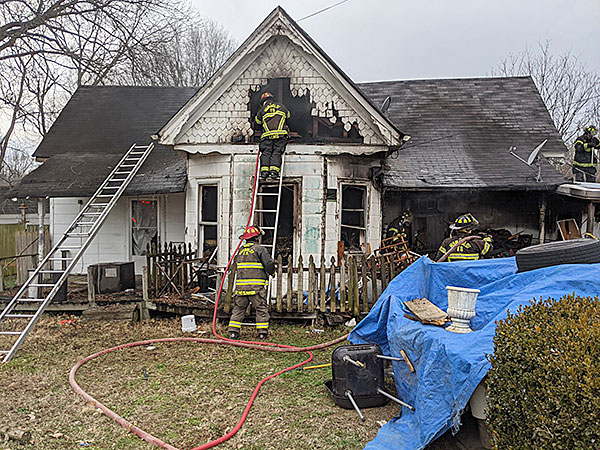 HOUSE FIRE – This house located on 21st Ave. in Humboldt suffered major fire and smoke damage. Unfortunately, a lady living in the house died in the fire. As protocol with a fire death, Humboldt Fire Department contacted the TBI. The fire is under investigation.

A house fire last week turned tragic when firefighters found a person inside who was deceased. On Wednesday, February 25 around 2:45 p.m., Humboldt Fire Department responded to a fire on 21st Ave.

“The house was fully involved with smoke and flames,” Fire Chief Chester Owens said when firemen got to the scene. “There was an occupant involved who was bedridden and deceased.”

When firefighters arrived, they learned there was a person in the house. Chief Owens said he could not release the name due to the ongoing investigation.

Chief Owens contacted the coroner and Tennessee Bureau of Investigation as standard protocol when there is a death. Owens said the TBI agents were on the scene in about 45 minutes. The incident is still under investigation.

The fire was “knocked down” in less than an hour, which was rather quickly, according to the chief, especially with a fully engulfed fire.
Humboldt Police Department, Humboldt Area Rescue Squad and Gibson County EMS all responded to the fire. Chief Owens said they all worked together and praised how well all four join forces as a team.

This is the second death by fire in less than a year. In 2020, Perry Boling perished in an apartment fire last May.

Chief Owens said fires involving deaths are not common at all. Prior to Boling’s death, there had not been a fire death for several years.
The Humboldt Fire Department asked people to practice safety during cold months. Keep heaters three to four feet away from all objects. Have a working smoke detector in the house, multiple one for larger houses.