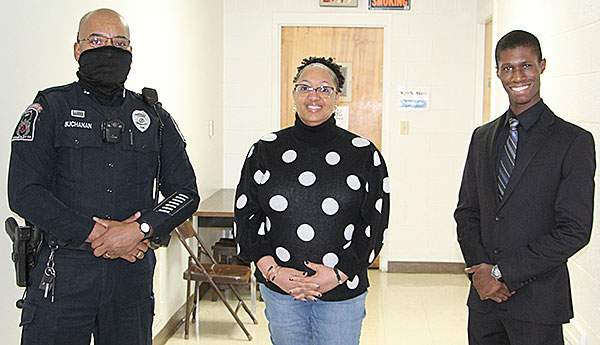 NEW POLICE STAFF – Humboldt Police Chief Reynard Buchanan (left) made a recommendation to the Humboldt City Board to hire Georgette Willis (center) as a full-time dispatcher. Willis has been a part-time dispatcher. Chief Buchanan also recommended hiring Devin Wiggins as a patrolman for HPD. Both recommendations were approved during the city board meeting last week.

The Humboldt Police Department has two new people on staff after the city board approved two new hires. The Humboldt Board of Mayor and Aldermen voted to hire a new officer and a full-time dispatcher.

Alderman Don Graves paid Wiggins a complement when he asked if he had military experience. Wiggins said he did not. Graves said his demeanor was that of someone with a military background. It was noted that Wiggins was in ROTC during his high school years.

The board unanimously approved hiring Wiggins. Mayor Marvin Sikes welcomed Wiggins to the police department. Sikes told Wiggins there a lot of good people, young and old, that has his back.

The board wanted to know when Wiggins would attend the Police Academy. Chief Buchanan said he hoped to get him in the March session, but if not, the next available class.

Chief Buchanan also submitted his recommendation for hiring Georgette Willis as a full-time dispatcher. In his recommendation letter to the board, the chief said Willis has been a part-time dispatcher for the department for the past 10 months and has done a good job. Willis has passed the National Dispatcher Selection Test, medical exam, drug screen and psychological evaluation. Willis also worked for the Jackson

The board voted 4-0 to approve Willis’ hire. Alderman James Shivers was unable to attend the meeting. 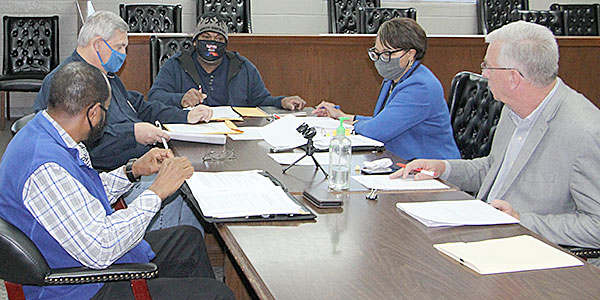 CITY BOARD – The Humboldt Board of Mayor and Aldermen met Monday, February 25. Among topics on the agenda were hiring two police staff and approving the second readings of several ordinance. Aldermen Monte Johnson (from left), Bob Pruett and Leon McNeal discuss city business as do city administrative assistant Marquita Patterson and Mayor Marvin Sikes.

•The board considered approving a beer license to Tabbetha Roberts, owner of 3 Doerrs Down. Roberts’ father had passed away and his license had expired. Roberts said she had been working and helped run the establishment for the past several months with her parents.

Chief Buchanan stated Roberts has a valid driver’s license with no driving or criminal violations. There were also no outstanding warrants on her. Both references spoke favorably of Roberts, the chief noted.

Alderman Bob Pruett asked if they planned to sell liquor. Roberts replied she did not and wanted to keep it just like the family has run the bar for years.

•Tom McCue, complex manager for Tyson Foods, had requested to address the board. McCue said he was there to show his appreciation of the Humboldt Fire Department and the Humboldt Police Department. McCue said the plant had an issue recently and smoke filled the room. The fire department had a tool that could tell exactly where the fire and smoke was coming from. He said it would have been impossible to tell where the hot spot was without this tool.

McCue said there have been other cases where the police or fire department were called to the plant and each time they responsed very quickly. He wanted the mayor and board, and the audience attending the board meeting, to know how professional both departments are, and to “brag on them” as McCue put it.

Mayor Sikes said he really appreciated McCue’s feedback and agreed both departments do an excellent job.

•A letter included in the board packet from the police department reminded the board that city stickers are available through March. After that, a late fee will accrue.

Board member Leon McNeal said he would like to ask the mayor and board for a waiver on city sticker due to the pandemic and people out of work.

Mayor Sikes said he understood McNeal’s concern but delaying the date would require changing an ordinance. That said, the mayor said last year the police department kept pushing back deadlines and would do the same this year.

Alderman Monte Johnson asked if the city had considered having the county collect for city stickers.

Chief Buchanan said the police department collects the fees currently, but it was something he had thought about before. It would be the board’s decision, the chief noted. Buchanan said it would be a lot of work on the front-end but would be better long term.

Mayor Sikes asked Chief Buchanan to do a study for collection of city sticker fees.

•Two properties located on Central Ave. were approved for rezoning. The second reading of both ordinances was held.

Ordinance 2020-08 would rezone property on the corner of Fitzgerald Dr. and Central Ave. from R-2 medium residential to B-2 general business. Owners James and Dora Williamson requested their property be rezoned in hope of bring commercial business to the location. The Humboldt Zoning Committee recommended the property be rezoned.

Board members McNeal and Pruett voted against the ordinance’s first reading and followed up again during the second reading. The 2-2 vote required Mayor Sikes to break the tie. He voted to approve the ordinance.

A second property on the adjacent corner of Fitzgerald and Central owned by Alderman Johnson was up for a vote to be rezoned. The second reading of Ordinance 2020-09 was held.

Alderman Graves said there are already businesses there and the board should not stop progress, but think about the future of the city. He made a comment that he would love to see a Popeye’s Chicken locate in Humboldt.

When the vote was called for, Alderman Pruett noted that since the other corner had just been rezoned, he voted to approve rezoning and the second reading passed.

•Six other ordinances up for second readings were presented and unanimously approved. All six dealt with amending the official code of the city and adopting the 2018 edition of the international codes. Each ordinance dealt with particular codes such as electrical, plumbing, building, residential, mechanical and gas.