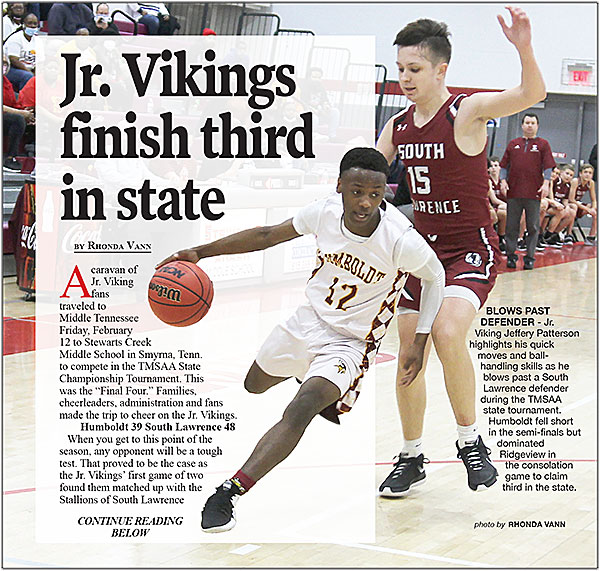 The game started out with a fast pace as both teams quickly got up and down the floor. South Lawrence scored the first points of the game with just six seconds off the clock. Humboldt answered as Jeffrey Patterson made a lay up for two points with 5:28 left. Both teams continued the fast pace but missed several opportunities on easy baskets. Patterson scored again with 1:50 left making the score 4-5. After a South Lawrence score upped their lead to 4-7, Kendrick Taylor stepped up with 1:08 left and scored the final six points giving the Jr. Vikings a 10-7 first quarter lead. 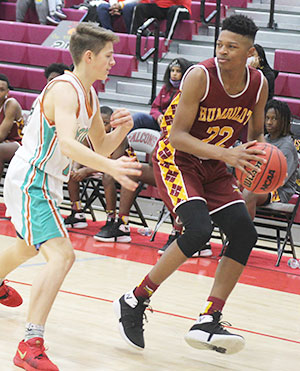 CORNERED – This Ridgeview Raptor thinks he has Kendrick Taylor cornered but Taylor eyes a teammate in the low post for a pass. The Raptors had no answer for the Jr. Vikes in the lopsided 49-22 Humboldt win.

The Jr. Vikings fought hard in the fourth quarter. Dontarious Broyles, Patterson, Shivers and Wedley all scored trying to mount a comeback but South Lawrence had an answer every time. The Jr. Vikings tasted defeat 39-48 for only the second time this season. This one hurt but there was no time to hang heads as they had to prepare for the consolation game on Saturday.

After falling to South Lawrence, the Jr. Vikes were back in action playing in the consolation game of the TMSAA State Championship Tournament. The winner of this game would be awarded third place for the tournament. The Jr. Vikings took on the Raptors and came out on top 49-22 to take home the third place trophy.

The Jr. Vikings started the game with Jeffery Patterson knocking down the first two points of the game, but Ridgeview answered with a 3-point shot and took an early lead 2-3. That would be the last lead for the Raptors. Stephon Shivers, Dontarius Boyles and Ke’Vontay Wedley led the Jr. Vikings to a 9-5 lead to end the first quarter.

Ridgeview started the second quarter with four quick points, tying the score 9-9. After a Shivers basket, Ridgeview called a time out with 3:45 left on the clock. That time out did not work to their advantage as Kendrick Taylor, Broyles and Shivers took the Jr. Vikings on an 8-3 run and a 19-12 half time lead.

The third quarter belonged to the “Big Ole Boy” in the middle, Stephon Shivers. Shivers had, without a doubt, his best game of the season. He was inspired by the pre-game speech given by Humboldt Athletic Director George Yarbro.

“Okay boys, lose and we’re going through the drive through; win and we sit down at the buffet,” Yarbro joked with the guys.
Shivers was determined he and his teammates were going to get that sit down at the buffet. He scored 12 of his game high 22 in this quarter. Wedley, Broyles, Patterson and Taylor all contributed scores that led to a 38-19 third quarter Jr. Viking lead.

With the big lead going into the fourth quarter, the Jr. Vikings knew they had the game wrapped up. They still came out and played defense as if they were losing, holding Ridgeview to just three points the entire fourth quarter. Shivers, Taylor and Kiziaha Curry finished out the scoring as the Jr. Vikings claim third place at the state with a dominating 49-22 victory.

THIRD IN STATE – The Humboldt Jr. Vikings went into the state tournament after cake-walking through the season, and district and sectional tournaments with only one blemish on their record. However, South Lawrence proved to be tough last week in the TSMAA State Tournament, handing the Jr. Vikes their second loss of the season. Humboldt rebounded with a crushing win over Ridgeview in the consolation game to claim third in the state.