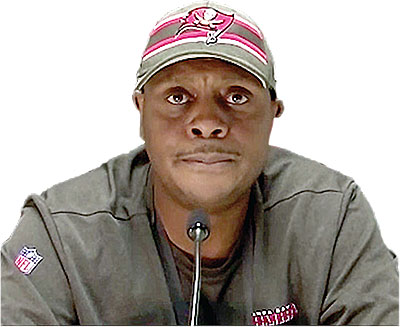 A former Humboldt Viking superstar is about to be on the biggest stage in the football world. Kacy Rodgers will coach in Super Bowl LV in Tampa Bay, Fla. this Sunday.

Rodgers is the Tampa Bay Buccaneers’ defensive line coach and will be the first Humboldtan to participate in a Super Bowl. The Bucs will take on reigning champion Kansas City Chiefs.

Doug Atkins won an NFL Championship in 1954 with the Cleveland Browns prior to the Super Bowl era as the only other Humboldtan to make to the league’s biggest game.

“It makes you appreciate everything you’ve worked for and now have the opportunity of a lifetime,” Rodgers said of making it to a Super Bowl. “I’ve been coaching in this league for 18 years. Literally, it may not occur again.”

When asked how preparing for a Super Bowl is different from preparing for a regular season game, Rodgers said everything gets ramped up. Teams have two weeks to prepare. Last week was mainly practice. Monday was media day. Tuesday was back on the field, then Wednesday through Friday are walk-thru days. Friday and Saturday will be meetings at the hotel as well as Sunday morning. Then the team will bus from the hotel to the stadium Sunday afternoon for the game.

“You’ve got to get all your family tickets and hotel plans together,” Rodgers said that is different from the normal game plans. “We’re also dealing with COVID. During the season, we get tested every day. For the Super Bowl, we get tested twice a day. Everyone one attending the game will have to be tested. It’s crazy times.”

This is the first time in Super Bowl history a football team will play in its home stadium. Does this give Tampa Bay an edge? Rodgers said not really. All week the team has been staying in a hotel so they are not in their own beds at night. He said at this level, teams are accustomed to staying in hotels during the week or preparation.

The one advantage is having their home locker room at Raymond James Stadium. The Super Bowl determines the home team by rotating between conferences each year. This year is the NFC’s home year so the Bucs get to use their own locker room. Rodgers said if this had been the AFC’s year, the Bucs would be using the visitor’s locker room and Kansas City would be using Tampa Bay’s locker room.

“We get to pick our jersey color and we (Bucs) like white,” Rodgers noted. “The field has all new turf so it should be in good condition for the game.”

On the defensive side of the ball according to NFL.com. the Bucs had the eighth ranked defense in the NFL under defensive coordinator Todd Bowles. They were first in rushing yards allowed per game, seventh in total yards per game and interception rate, and sixth in sacks per game.

Tampa Bay had 48 sacks with 17.5 of those from the interior of the defensive line in 2020. The Bucs have the top rated run defense in 2020 and were fifth in takeaways with 15 interceptions and 10 fumble recoveries.

Rodgers is in his second year as the Bucs’ D-line coach. Under Rodgers’ watch, the defensive line set the foundation for the NFL’s top run defense, which limited its opponents to 73.8 rushing yards per game and 3.26 yards per carry, according to the Buccaneers website.

Rodgers got his first taste of coaching close to home at the University of Tennessee at Martin, working under head coach Don McLeary. McLeary tapped Rodgers to be his defensive line coach in 1994. Three years later, Rodgers was named assistant head coach.

In 1998, Rodgers left his home state and headed south to become the D-line coach at Northeast Louisiana University.
One year later, Rodgers came back to his home state where he coached at Middle Tennessee State University, again as a defensive line coach. In his second year at MTSU, he added the title of assistant head coach for two years. His final year at MTSU, Rodgers and the Blue Raiders were co-champions of the Sun Belt Conference with an 8-3 record.

The very next year, Rodgers moved up the ladder once again, this time with his first NCAA Division I team, the Arkansas Razorbacks. With the Razorbacks, Rodgers’ defense ranked second in the South Eastern Conference (SEC) and 18th in the nation. The SEC has been the powerhouse college football conference for the past couple of decades.

It was at Arkansas when Dallas Cowboys owner Jones noticed Rodgers and made him part of “America’s Team”. In 2003, Rodgers worked with defensive tackles and took over as the defensive line coach in 2005 through 2007. This was the beginning of a pattern for coaching top ranked run defenses. In four of Rodgers’ five seasons in Dallas, the team ranked inside the NFL’s top 10 for rush defense, notably finishing sixth in the league in 2007.

From 2008-20014, Rodgers spent time on the Miami Dolphins coaching staff as D-line coach. During his time with the Dolphins, the team posted 287 sacks, the third-highest mark in the NFL, while allowing the eighth-fewest yards per carry (4.02) during that span.

Prior to coming to Tampa Bay, Rodgers spent four seasons with the New York Jets from 2015-2018 as the defensive coordinator. Coach Bowles was the Jets’ head coach during those years. The Jets had one of the league’s top run defenses.

In an article from the Humboldt Chronicle in 2003, Rodgers spoke about his career, both on the field as a player and on the sidelines as a coach. The following are exerts from that article.

“After working with coach (Bill) Parcells for about two months, it is easy to see why he has been so successful in his coaching career,” Rodgers said. “I have learned so much already.  He is tough, tenacious, demanding and expects to be successful.  The NFL stands for ‘Not For Long’ so you better enjoy the ride.”

Rodgers began his football career at Humboldt Junior High School where he played under coach Ron Canada and Wayne McLemore.

At Humboldt High School, he played under coach Jack Cain and coach Danny Nowell. Rodgers continued playing both offense and defense. At HHS, Kacy was a standout and was regularly named as the Exchange Club Player of the Week in The Courier Chronicle (now known as The Chronicle).

“My favorite coach in junior high was Wayne McLemore because he never let me quit,” Rodgers said. “In high school, I liked Danny Nowell because he was always positive.”

Rodgers said Ron Canada and Teco Fuchs helped mold him, “They were tough and expected me to be tough.”

He added that he had a lot of respect for coaches Jesse Apple and Thomas Boykin. Even though they never coached Rodgers, he said he could always talk to them about anything and they gave him good advice.

“He’s a fine individual,” longtime friend Sonny Herndon said. “He and his family were so close to us, I felt like he was my own.” Herndon added that Kacy’s parents did a fine job of raising him.

Herndon said he spotted something in Rodgers early in his career at Humboldt High School. He remembers how quick he could pressure the ball carrier and his ability to use his hands to shrug off blockers.

Rodgers signed a football scholarship with the University of Tennessee. Kacy was redshirted in 1987. He was a four-year letterman from 1988 through 1991 and an honorable mention All Southeastern Conference selection. Rodgers earned defensive starts in three different seasons as a Volunteer under Coach Johnny Majors. As a linebacker and defensive end, he contributed to Volunteer teams that won two consecutive SEC Championships in 1990 and 1991 and played in three New Year’s Day bowl games. The Vols beat Arkansas in the 1990 Cotton Bowl, beat Virginia in the 1991 Sugar Bowl, and lost to Penn State in the 1992 Fiesta Bowl. In 1989, the Volunteers posted an 11-1 record and finished the year ranked fifth in the nation.

Rodgers said defensive end was his favorite position at UT where he played under defensive line coach Rex Norris.
“Coach Norris introduced me to the NFL and was instrumental in me acquiring an internship with the Chicago Bears,” Rodgers added.

Following his collegiate career, he signed a free agent contract with the Pittsburgh Steelers and later played linebacker with the Shreveport Pirates of the Canadian Football League before returning to Knoxville to complete his degree in political science in 1993.

Now as a Super Bowl coach for Tampa Bay, Rodgers has made it to the highest level possible for the game of football. Will he become a Super Bowl winning coach? The world will find out this Sunday when Rodgers’ Bucs take on the Kansas City Chiefs.

“Everything I’ve accomplished, I learned in Humboldt, Tennessee,” Rodgers said Monday from his Tampa Bay hotel room. “From the people I’ve been involved with, the coaches, my work ethic, everything started at home.”