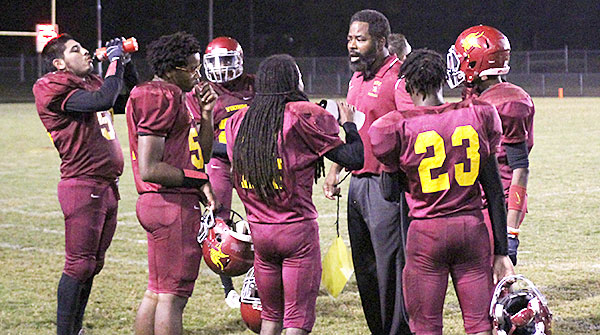 COACHING THEM UP – Humboldt Viking head coach Anthony Ballard gives his team some instructions on the sidelines during a timeout against Gleason, Ballard’s final home game on October 9. The Vikings beat Gleason on homecoming night to give Ballard his first win of the season. Humboldt went 3-1 to close out the season.

A Humboldt coach is hanging up his whistle and clip board, and will be leaving the sidelines on Friday nights. Anthony Ballard turned in his resignation as head football coach for the Vikings.

Ballard will remain with Humboldt City Schools in his other capacities, but made the difficult decision to walk away from the Viking football program.

“The reason for resigning—getting back to my family,” Ballard said. “I’ve been a mentor to these kids (Viking football players) for three years. I’ve only seen my son play (football) three times.”

Coach Ballard has two sons, both play football. Steven Ballard is a senior at Milan High School and Anthony Jr. plays for Southeast State Missouri University in Cape Girardeau, Mo. Steven is getting looks from colleges now and could be playing on Saturdays next year as well.

“Now it’s time to travel and watch my sons play ball… and do some fishing, definitely fishing.” Ballard chuckled. “Another reason, you have to analyze what’s best for the program—what’s best for Humboldt football. You evaluate where you are and ask yourself if you are the one to take it to the next level. I pray the next person can continue to grow the program, move to the next level as a playoff team and strive for state champions.”

When Ballard took the reigns in 2018, the Vikings were coming off their first winless season in decades. He faced the challenge of getting students to play football. The previous year, the team suited up 20 or less players at times.

Athletic Director George Yarbro moved Ballard from junior high coach to high school coach. Ballard had served as the Jr. Vikings’ coach the previous two years before moving up in the ranks.

Most of the players on this year’s team, Ballard has coached for five years at the junior high and high school level. For some Vikings, Ballard is the only football coach they’ve known. At the time Ballard was promoted to lead the Vikings, Yarbro and director of schools, Dr. Versie Hamlett, said stability was one of the main factors in their decision to move him to the high school level.

As you can imagine, the decision to step down is never an easy one. Ballard said this decision was his and his alone. He said no one spoke to him about resigning. Ballard was quick to point out he is not giving up coaching, but just taking time off to watch his sons. He fully plans to coach again. He said it’s in his blood.

Ballard has no plans to leave Humboldt City Schools. Ballard said he loves the opportunities the school system affords.

“I will still keep in touch with my boys,” Ballard added. “I’ll still keep up with football, just not from the sidelines, but as a fan in the bleachers.” 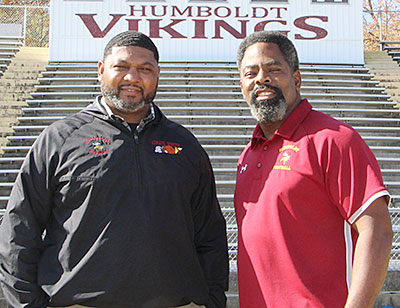 BALLARD MOVING ON – Humboldt Viking head football coach Anthony Ballard (right) submitted his resignation recently. Ballard will remain with Humboldt City Schools, just not as a football coach. Now, Ballard will be able to watch both his sons play football. Humboldt City Schools’ athletic director George Yarbro (left) will have to find someone to replace Ballard before next football season.

“What I’m going to miss the most is my players—not having that daily influence with them,” Ballard said of the bittersweet resigning. “The goal is to stay involved with these players and lead them into making right decisions. Coaching is an opportunity to guide the lives of your players. If you accomplish that, you’ve been successful.”

“He brought more to the game than Xs and Os,” Yarbro said of Ballard. “I appreciate the job he’s done with the challenges he was faced with. He did what he was hired to do with our young gentlemen. But sometimes you just know when it’s time (to leave).”

Coach Ballard has that same admiration for Yarbro. Ballard said Yarbro let him do his job and never came in telling him who to hire or how to run the football program.

Ballard struggled to put wins on the board, winning only one game each year in his first two seasons. This year looked to be a repeat until the Vikings turned it around winning three of their last four games. Ballard admits it wasn’t all him.

“I brought Coach (Dalton) Vann in the mix,” Ballard said of the Jr. Viking coach whose season had ended. “I liked what he did with the junior high team. I told him I needed help. We sat down before each game and mapped out our game plan.”

Ballard turned the offensive reigns over to Vann and the Vikings won their last two games of the season, ending on a high note.

It’s these assets that Ballard can continue to bring to students, just not on the gridiron. Ballard said he wants to instill leadership qualities in the students like respect. He want students to not look at their current conditions, but strive to be better in life, for themselves and for their future families. He wants his players to become adults and contribute to society. He wants his players to grow to become role models of their own, as well as lead and mentor the next generation of athletes and students.

Next season, the mighty Vikings will have a new leader at the helm. But don’t be surprised if you see Ballard cheering on the red and gold from the grandstands.