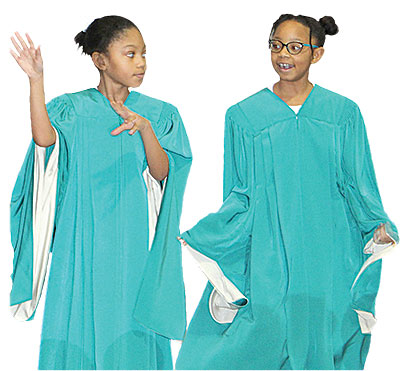 The celebration began at Stigall Primary School Thursday afternoon.  The theme for their program was “Music for the Soul”. Classes sang hit songs from the Jackson 5, Tina Turner, Motown and Boyz II Men, among others.

Teachers and students, pre-k through first grade, worked hard on their three minutes of fame. Some classes dressed up for the era they were singing. One class wore white t-shirts and tight rolled jeans while others wore sunglasses and capes.  Some made signs to hold up during their performance. 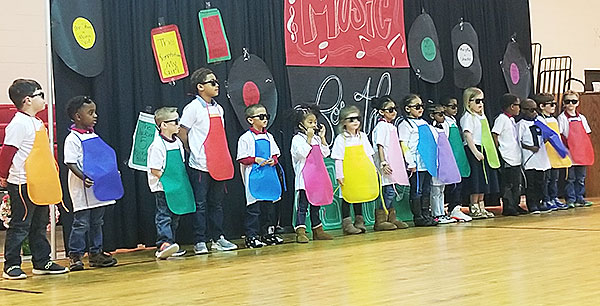 TOO COOL – First graders at Stigall Primary School sang a soulful tune with their shades down last Thursday during their program to honor Black History Month. Kindergartners and pre-k students participated in the program as well.

Harriet Tubman, an escaped slave that lead slaves to freedom, was played by Rylee Champion. Several poems were read by students that were about slavery or the things they had to endure during slavery.

The history of Freedom Riders was told by Ayden Barrett, Shanara Pledge, Mariah Warren and Moriah Green. The Freedom Riders were groups of white and African American civil rights activists who participated in Freedom Rides, bus trips through the American South in 1961 to protest segregated bus terminals.

Karley Grider and Moriah Green read “The Ballad of Birmingham” that was written in response to the 1963 bombing of the 16th Street Baptist Church, in which four little girls were killed.

While the students may have thought their songs were fun or their skits seemed short. All the attendees of the programs learned about bands, individuals or movements that paved the way to end slavery, or those that began the movement to end segregation.

Humboldt Jr./Sr. High School was forced to postpone their Black History program scheduled last Friday after the keynote speaker was not able to attend. The program will be rescheduled.