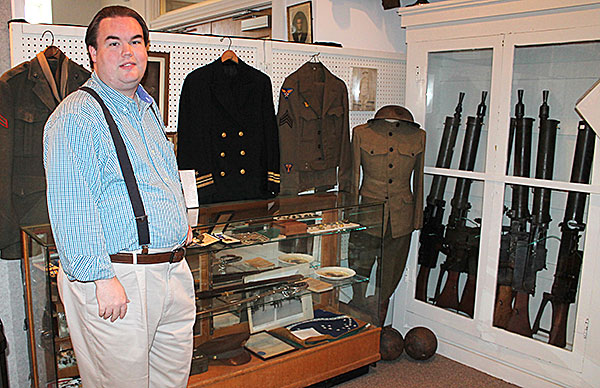 MUSEUM CURATOR – John Blankenship, curator of the Humboldt History Museum, looks over some of the WWI weapons and uniforms on display at the museum. This month, the museum celebrates its 40th year. When the museum first opened in 1979, it was named the Humboldt Strawberry Festival and Historical Museum and was located inside the Humboldt Public Library. The museum later moved into the old city hall building, along with the Chamber of Commerce office and the West Tennessee Regional Art Center.

The Humboldt History Museum is celebrating its 40th anniversary in November. Founded in 1979, the museum holds a multitude of historical Humboldt artifacts and memorabilia.

Curator John Blankenship offered some history of the history museum. It was named the Humboldt Strawberry Festival Historical Museum. The name was changed to reflect the museum being more about Humboldt, which of course includes the Strawberry Festival.

“The museum was originally in the Humboldt Public Library where the children’s library is now,” Blankenship said. “At that time, it had more Strawberry Festival memorabilia. It had antique furniture and kitchen cabinetry, military items, tools, and lots of Strawberry Festival and strawberry related items.”

When the mayor’s office and police department moved from the former city hall building on Main Street, Merchants State Bank (now Regions) purchased the property. The police station wing that had been added onto the original city hall was torn down for additional bank parking.

Renovations of the old city hall began to give it new life, even when money was tight.

Blankenship said somewhere around the same time, Benjamin and Gertrude Caldwell donated and loaned their art collection to the city, which resulted in forming the West Tennessee Regional Art Center. The art center is located on the second floor.

Soon after, the Humboldt Chamber of Commerce moved into the building as the third tenant. 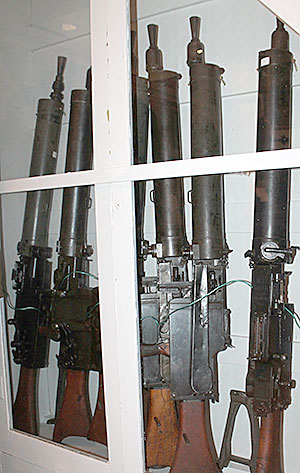 WORLD WAR I WEAPONRY – These German machine guns are among some of the items on display at the Humboldt History Museum located in the former city hall building on Main Street. Curator John Blankenship said there are over 5,000 items and memorabilia in the museum.

Blankenship said there are items dating back to the mid to late 1800s, one of the oldest being a newspaper, the Humboldt Headlight, from November 1869. There is also an old pitcher and bowl set from the 1870s from the Osborne Hotel.

“The majority of the items in the museum range from the 1900s to the 1950s,” Blankenship added. “Of the 5,000-plus items that range from postcard to a WWI machine gun, it’s the weaponry that grabs the attention of museum visitors.”

The military section includes several German guns from WWI, along with swords, bayonets and uniforms.

An old, original Ma Bell operator switchboard may not be the oldest item in the museum but is also popular with visitors. Another popular item is a map of Humboldt from 1860. The map was not an actual map of Humboldt, but a promotional map of how the projected city would be laid out, much of which did come about.

The museum has photographs of almost every Humboldt mayor all the way back to the very first mayor, Moses Senter. Senter once lived in the antebellum house on Main Street that is now Twin Oaks. He was also the minister of First Baptist Church.

Blankenship invites everyone to come to the museum and see first hand the rich history of Humboldt. Normal business hours are Monday through Wednesday, 2 to 4 p.m. or you can call Blankenship at 420-1316 to set up an appointment. He will lead you down the long road of Humboldt’s rich history.