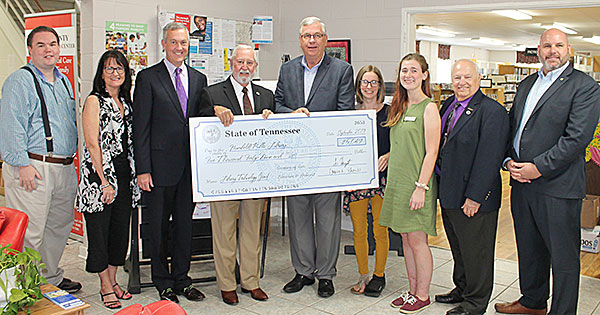 CHECK PRESENTATION – Tennessee Secretary of State Tre Hargett was in Humboldt last Thursday to present a $5,000 check to the Humboldt Public Library. The donation is through a state grant for technology and requires local matching funds that were provided through the city of Humboldt. Those present during the celebration are (from left) board members John Blankenship and Elna Blankenship, Secretary Hargett, State Representative Curtis Halford, Humboldt Mayor Marvin Sikes, Humboldt Library Director Brittney Keller, Children’s Librarian Sarah Peden, Don Farmer and Ed Jackson III, field rep. for Congressman David Kustoff.

Humboldt had a very important visitor last Thursday. Secretary of State Trey Hargett was in town to make a presentation to the Humboldt Public Library.

A check for $5,049 was presented from the state’s Library Technology Grant fund. The grant requires local matching funds, making the total amount $10,098.

“Access to technology is something many of us take granted,” Secretary of State Tre Hargett said. “Our public libraries across the state play a pivotal role in connecting Tennesseans. I’m proud of the role the Tennessee Library and Archives plays in increasing access to technology and education across the entire state.”

“Libraries are more than books,” Hargett said during the presentation ceremony. “Many people still do not have computers or internet. Libraries offer computers for the public to use. Libraries offer so many things. We’ve got to commit more and do more for the communities.”

Hargett thanked State Representative Curtis Halford for he and his colleagues in the House of Representatives for overseeing the states money. Rep. Halford also attended the celebration last Thursday.

“It’s always good to help out our libraries,” Halford said of his voting record in the House. “Those are easy votes for me to push that button.”

The grant would not have been offered was it not for the local matching funds. Humboldt Mayor Marvin Sikes was key in securing the matching $5,000. Hargett acknowledged how tax dollars are sometimes hard to come by and praised Mayor Sikes for being able to find the matching funds to qualify for the grant.

“Humboldt Public Library applied for the 2020 Technology Grant, which is administered and funded by the Tennessee State Library and Archives through the Secretary of State Tre Hargett,” Library Director Brittney Keller explained how the grant functions. “This grant is used to replace or purchase technology for use by staff or the public. A portion of this grant will be used to purchase three AWE computers. These computers are bilingual literacy stations that are preloaded with educational games, including STEM (science, technology, engineering, math), for ages pre-kindergarten through first grade.”

Keller said she is grateful to Mayor Sikes and the city board, and Gibson County Mayor Tom Witherspoon and the county commission for their continued support of library initiatives.

Secretary Hargett’s visit was short but sweet. He was visiting other communities in West Tennessee with good news as well. It was noted that the $5,049 grant was the largest amount of all the city libraries that received grant funding.

For more information about the Humboldt Public Library and the services offered, please contact Director Keller at 784-2383.