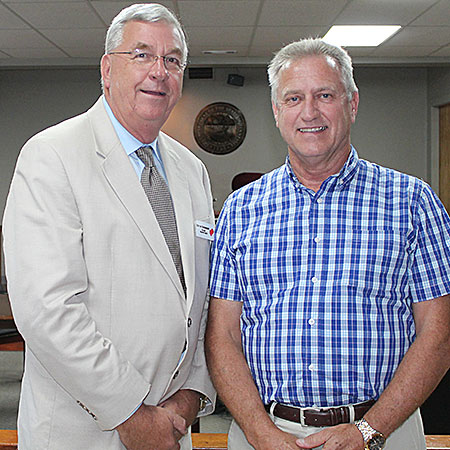 NEW BUILDING INSPECTOR – After several weeks without a building inspector, Mayor Marvin Sikes and the Humboldt City Board voted to hire Michael Uselton (right) as the new city building inspector. Uselton is certified by the state in residential and plumbing. Uselton said he will continue working toward certification in maintenance and commercial.

The city of Humboldt officially has a new building inspector. Michael Uselton was approved during the Humboldt Board of Mayor and Aldermen last Monday evening.

Humboldt Mayor Marvin Sikes submitted his recommendation to hire Uselton. The mayor said Uselton had been working part-time with the city’s permitting and has the city up to date. He noted there were approximately $130,000 worth of permits.

“I would appreciate the board’s consideration,” Mayor Sikes said to the board. “He’ll be an asset to the city.”

Uselton is certified with the state of Tennessee as a residential building inspector and meets all the qualifications required for the position of the city of Humboldt.

Mayor Sikes also recognized Ricky Bailey, who was in attendance at the board meeting. Bailey is Gibson County’s building inspector and had been working for Humboldt while the city was in absence of a building inspector. The mayor and board thanked Bailey.

Uselton said he and Bailey had been working closely together and will continue to do so.

“I’m excited to have a certified building inspector,” Alderman Don Graves stated, even before the board had voted.

Board member Bob Pruett asked Uselton if he was certified as a commercial inspector. Uselton said he was not but is working toward becoming a certified commercial building inspector.

“I have Plumbing 1 certification,” Uselton added. “You work in an order—building, plumbing, then maintenance, before commercial. But residential and commercial have a lot of the same information.”

Mayor Sikes told the board and audience that Uselton paid for his own books and testing out of his own pocket. The city did not fund any of the training to become certified.

Mayor Sikes said all city employees are hired on a probation period.

McNeal suggested giving Uselton a year to earn all the qualifications and do a follow up next year.

“I assure you, I will get all the qualification,” Uselton told the board.

The board unanimously approved hiring Uselton as city building inspector.

In Chief Buchanan’s letter of recommendation to the board, he stated that Lemus had passed a physical agility test, medical exam, drug screen, psychological evaluation, the National Police Officer Selection Test and has met all the requirements of Tennessee law to become a law enforcement officer.

“He (Lemus) is from Crockett County and will be a good asset to Humboldt,” said Chief Buchanan. “He’s fluent in Spanish as well.”

Chief Buchanan said Lemus plans to attend the Police Academy later this year at the next session.

•The final agenda item was discussion of the cable television franchise. Humboldt is currently served by 1Tennessee for cable television service.
John Warmath, family owner of 1Tennessee, and general manager Dustin Twyman addressed the board what the franchise entailed.

Warmath said 1Tennessee, previously know as Click 1, Infostructure and Humboldt Cablevision, has had a city franchise for years. Now 1Tennessee has a state franchise. He said from the beginning of cable tv, businesses began building their systems and stayed within an area. But over the years, the coverage areas got larger and larger, therefore going to a state franchise that covers all areas of Tennessee.

Warmath assured the board that the city would still receive the same money from franchise fees. It is actually the city board that sets the fee amount the cable company pays. That amount is listed on the customers’ bill.

Graves asked how much the city receives in franchise fees. Warmath and Sikes did not know the exact amount but said it is somewhere in the neighborhood of $40,000 per year.