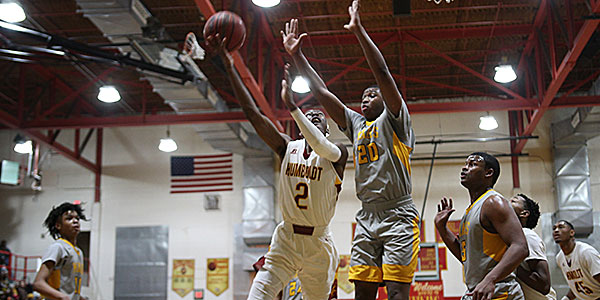 PERFECT LAYUP – R.J. Abernathy schooled MAHS on more than one occasion last Monday night. Abernathy was a beast in the paint and collected a total of 19 points in the Vikings 62-60 overtime win.

The Humboldt Vikings are currently packing their bags to make the 172-mile trip to the Murphy Center in Murfreesboro to compete in the state tournament. The Vikes punched their ticket when they faced off with Memphis Academic of Health Science School and pulled off the 62-60 overtime win.

The Thomas Ray Boykin Gymnasium was busting at the seams, with people even sitting on the floors, to see this anticipated match up. Both teams took the court ready to battle it out to see who would advance to the state tournament. MAHS wasted no time and showed their strong fundamentals, acing baskets left and right. They ended the first quarter with the lead, putting 15 points on the board. The vigorous Vikes were right on their heels with a strong 13 points. Humboldt’s defense and strong team foundation is what sets them above the rest. R.J. Abernathy was a beast in the paint and led the Vikes in the first quarter with a three pointer, followed by three baskets. Anthony Jones put two points on the board, along with Reggie Manley who went 2-for-2 at the charity stripe.

MAHS was a tough team and they took every opportunity they could to score. In the second quarter, they outscored the Vikes for a second time 16-11. Montrez Ward helped keep the Vikes afloat, draining a three pointer and a basket. Jones, Manley and Abernathy each cashed in on a basket.  It looked like Humboldt might be in trouble as they went to the half in an unusual fashion, down by seven points 24-31. The boys used the break to catch their breath and to strategize, and what ensued was a legendary second half.

Humboldt took advantage of the third quarter and schooled MAHS. The Vikings outscored Memphis 16-8 and even took the lead by one point 40-39. Manley was the man with a plan and nailed three baskets. Jones followed his lead and hit two buckets. Ward, Green and Abernathy each picked up a basket before the quarter ended. 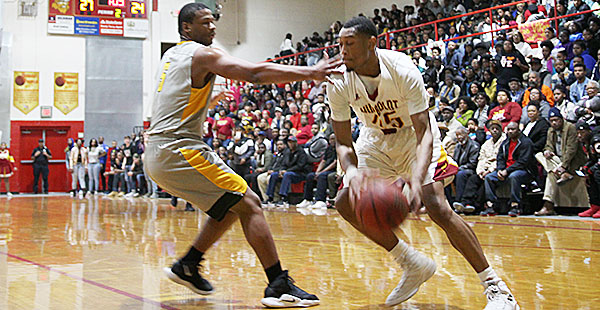 TOO TOUGH – Anthony Jones plays tough offense, drilling his way to the basket for a lay up. Jones checked in with 14 big points that helped the Vikes secure their 62-60 overtime win over MAHS.

It was going to be a close call in the fourth quarter and it was still anyone’s game. Humboldt is used to wearing their opponents out but not these guys. MAHS was used to playing intense all four quarters so the Vikes had their work cut out for them. Jones and Ward led the Vikings through the fourth quarter with four points apiece. Manley, Green and Abernathy scored a basket each. When it looked as if Humboldt had the win, MAHS came from behind and outscored the Vikings by one point tying the game 54-54.  The clock dwindled down and it was time for overtime.

With MAHS’ speed and agility, they could score quickly if given the opportunity; the Vikes knew if they could keep the ball they had a better chance to pull off the win.  MAHS only scored one basket in OT but went to the line eight times. With some Viking luck, the usual Memphis sharp shooters went dull and only made four out of the eight, putting them with 60 points. Humboldt used every opportunity that the ball hit their hands to score. Abernathy drilled two baskets. Ward went to the free throw line and netted both. Jones wasted no time and hit one more basket and those last two points pushed the Vikes over the top at 62-60 with half a second left. The crowd went wild as the clock hit all zeros. Humboldt escaped with the overtime win and punched their tickets to Murfreesboro.