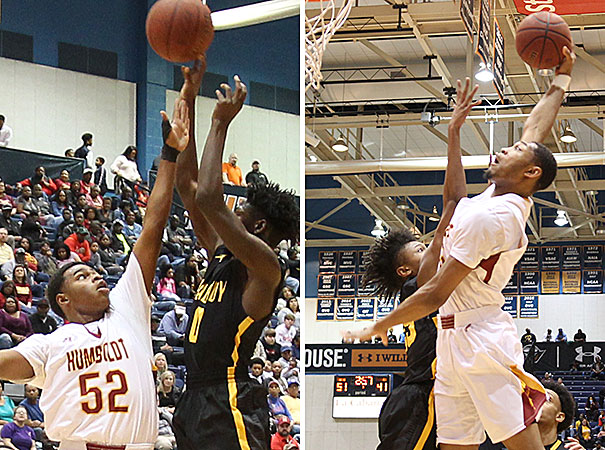 DOUBLE TROUBLE – Reggie Manley (left photo) and Anthony Jones (right photo) both dominated the court against Peabody at the Regional Championship game. Manley landed 16 big points and made many valuable blocks for the Vikes. Jones checked in with 14 points and a slam dunk that rocked the whole UTM campus.

The Humboldt Vikings and Peabody Golden Tide are no strangers to each other. Both teams had met up three times already and played their fourth game on Monday night in the regional championship game at UT Martin. Humboldt beat the Tide twice in regular season action, but lost in the district championship. The Vikings were hungry for a third win against the Tide, as well as the regional title. Humboldt stepped up to the plate and dominated the court. The Vikes took the win 84-67.

Anyone who has seen the Golden Tide and Humboldt play knows that both teams bring it and leave it all on the court. Humboldt showed up ready to play and to prove their title as the king’s of the court. Trenton also showed up to play and in the first quarter alone, scored 16 big points. The Vikings’ tough defense and quick offense gave them the upper hand. Humboldt out-scored the Tide with 19 points. R.J. Abernathy was a force to be reckoned with on the court. His fancy footwork and sharp shooting put six points on the board for the Vikes. Trent Green nailed one from behind the arc and then followed up with a basket. Reggie Manley did the dirty work in the paint and put four points on the board. Montrez Ward and Anthony Jones both hit a basket. Humboldt went to the second quarter with the lead.

Both teams played with the same intensity in the second quarter, putting the same amount of points up. Peabody scored 16 points and Humboldt scored 19. Abernathy led the Viking herd once more with a three pointer and two baskets. Jones aced three in the bucket. Ward, Adrian Turner and Manley each put up two points. Humboldt went to the break with a 38-32 lead. 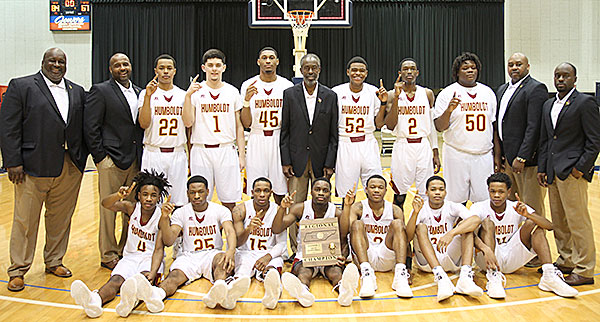 HEADING TO SUBSTATE – The Humboldt Vikings are headed to the Sub-State Sectionals after claiming the Region 7A championship last week with a pay-back win over the Peabody Golden Tide. The mighty Vikes beat Peabody twice during the regular season but fell to the Tide in the District 13A championship game. In the rematch region title game, Humboldt took the lead early and never looked back with an 84-67 win. Humboldt hosted the sectional game against Memphis Academy of Health Science on Monday, March 4. Game results were not available at press time and will be in next week’s Humboldt Chronicle.

After the break, the Vikes came back ready to finish what they had started. Humboldt went into over drive. Peabody tried to keep up but the Vikings’ suffocating defense held them at their mercy. The Golden Tide scored 15 points in the third quarter. Humboldt, on the other hand, scored a brutal 25 big points. Ward took command of the ship and sank three baskets and then went 3-for-4 at the charity stripe. Abernathy landed five more points and Green drained a second three for the night and Manley scored two in the bucket while Jones rocked the gym with a slam-dunk followed by a basket. Humboldt had caught their momentum and they were not looking to stop it anytime soon. The Vikes went to the final quarter leading 63-47.

Trenton had their best scoring quarter in the final period with 21 points. Humboldt matched them basket-for-basket and also scored 21 points. Ward led the quarter, draining a three pointer and then swished six out of seven free throws. Manley went back to work in the lane and scored three more baskets. Abernathy 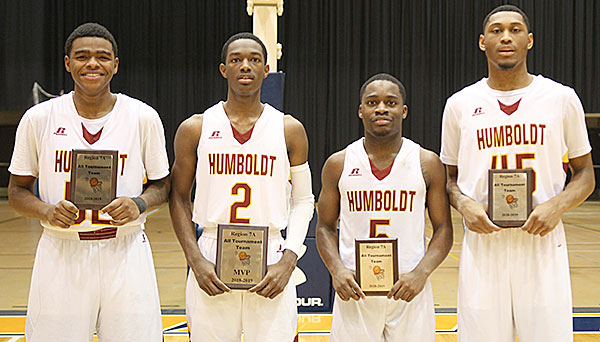 REGIONAL AWARDS – Four Humboldt Vikings (from left) Reggie Manley, R.J. Abernathy, Montrez Ward and Anthony Jones made the Regional 7 A All tournament team. Abernathy was named as the MVP of the Region 7A Tournament.