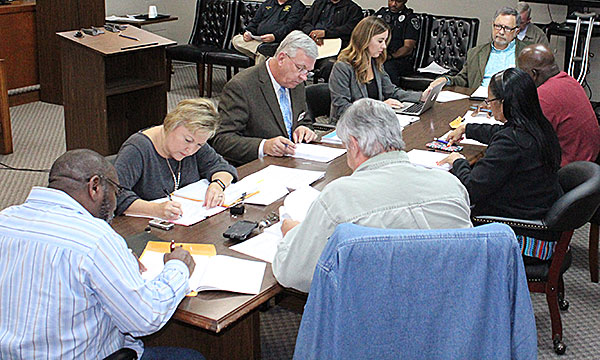 Soon two policemen will have new rides after the city board approved purchasing two new SUVs for the Humboldt Police Department.

Mayor Marvin Sikes opened sealed bids for SUVs submitted by Gene Langley Ford, Lonnie Cobb Ford and Humboldt Chrysler Dodge Jeep Ram for two different versions of vehicles. One is for a standard vehicle that will be used by an investigator. The other is for models with the police interceptor package, with beefed up specifications to handle the day-to-day battering needed for a patrolman.

The Ford bids were for Explorers while the Dodge bids were Durangos.

Humboldt CDJR’s Durangos were the lowest bids on both the standard package and the interceptor package.

It was noted during the meeting that the city had budgeted three new police vehicles for the 2018-19 fiscal year but only two were to be considered during last week’s board meeting.

Alderman Leon McNeal said the board should consider purchasing one vehicle from Langley and the other from Humboldt CDJR since both are located in Humboldt. He further suggested purchasing the interceptor version from Gene Langley Ford and the standard model from Humboldt Chrysler Dodge Jeep Ram.

Alderlady Donna Johnson asked Police Chief Reynard Buchanan which he preferred. Chief Buchanan said he had not driven a Durango but had driven the Explorers and knew their quality and durability, especially for the patrol car that gets more abuse than an investigator’s vehicle. With that said, the chief said his investigators preferred the Durango over the Explorer.

Alderman Don Graves suggested getting both vehicles from Humboldt CDJR since they had best price. But the majority of the board liked the idea of using two local dealerships for the purchase.

Johnson noted there wasn’t a lot of difference in money between the two bids.

“Lonnie Cobb is $4,000 difference,” Graves disagreed. “We have to honor the bids or there’s no use in bidding.”

“We don’t have to take the lowest bid,” Mayor Sikes noted. “If you want the two lowest or we can split it between them.”

“The chief said he likes the Explorer,” McNeal said.

Alderman James Shiver then motioned to accept the bid from Gene Langley Ford for $33,192 for the Explorer with the police interceptor package. Johnson seconded the motion. McNeal asked for a roll call vote on both bids, which passed 4-1 with Graves casting the nay vote.

The board unanimously approved going with Humboldt Chrysler Dodge Jeep for the standard model Durango for the investigator.

•The board unanimously voted to user TLM Associates as the engineering firm for the downtown enhancement Phase IV. This part of an overall project will be to connect Spangler Park, Viking Park and Humboldt Jr./Sr. High School together by installing sidewalks and renovating restrooms located on the properties.

The city applied for a grant to help fund the project several months ago. Hiring an engineer is the next step in the process.

•Humboldt Fire Chief Chester Owens submitted a recommendation to hire Stephen Lewoczko as a new firefighter. Chief Owens said the department had received several applications but some did not pass the agility test. Owens said if they cannot pass this test, then the applicant surely will not be able to pass the state’s certification test.

Johnson asked the chief how many firefighters the department is currently short, to which Owens replied, six. That said, Owens said his department is always fully staffed with some getting overtime pay.

•The board accepted the resignation of Humboldt policeman Colby Burmeister. Burmeister accepted a position with Madison County.

It was noted that the patrolman had not been with Humboldt PD for two years yet and would be responsible for repaying the city for his training.

Chief Buchanan said Burmeister would repay that portion remaining of his training.

City attorney, Terri Crider, said Burmeister is aware he will have to repay the city, prorated for the remainder of his two-year commitment.

“We want that money,” McNeal stated.