Dusty Emerson is one of the most hard working and most respected individuals in Rutherford.

Dusty is the son of Jeff and Robbie Greer Emerson, and his grandparents are Arland and Frances Emerson. Dusty was born in 1981 in Union City. His parents both attend church at Dyer First Baptist. Both Dusty and his wife are youth directors at FBC in Rutherford. He also plays in the church band. He played bass guitar with the famous gospel band Saul2Paul for three years. It was the constant travel from city to city that made this family man leave the group. One week they would be in Cincinnati, the next week in Panama City.

As a youngster, his first home was on Mill Street in Rutherford. He remembers Selena Selph coming to their house every day. His mom used to watch them.

His first job out of high school was working in his mom’s video store in Rutherford. It was called Fast Forward Video. He also had a local access video channel called GCTV. It was based out of the cable office in Dyer. He sold advertisements and broadcast the football games. He has also worked for the Humboldt Chronicle and the Tri-City Reporter. He opened Warehouse 14, the antique store in Rutherford. He ran the store for three years and then it was sold to a preacher in Kenton. The building was built in 1890. It had an elevator inside of it.

He and his wife Beverly met at a friend’s wedding, Jamie and Tiffany Hamilton Williams. The Williams live in Mason Hall now. She was a bridesmaid.

Beverly is from Bradford and she teaches at Rutherford. After they were married, she and Dusty honeymooned in Vegas. They have been married nine years. She teaches fifth and sixth grade language arts and has been teaching 12-13 years. They have a son, Cooper, in first grade and a daughter Annalia, age four. Cooper is big into Davy Crockett.

Dusty serves on the Davy Crockett Days committee. There were so many people there for Bingo this year, they had to play with Cheerios. He and his wife were in charge of the Escape Room.

Dusty works at McKenzie Elementary teaching special education. He teaches second and third grade. He just graduated at Union University this past year. He was the oldest one in all his classes. One girl, when he was 37 years old told him I thought you were one of us. He said, “What do you mean one of you, I am!” He said, “ I won’t lie to you, it was a hard road to travel. At one time, I had three part-time jobs with a family.” He taught art at the school in Rutherford and was a substitute teacher.

He was not a good student in school. He had the ability to be good, but he just did not apply himself. So when he applied to Union, initially he was turned down. One of his advisors told him he should write a heartfelt letter to them and that’s just what he did. He told me, “When you become a Christian, the old you dies and the new you lives on. He told them, the person you see on this paper is not who I am now, so I’m asking you for an Educational Baptism.” He turned his four-page letter in and was accepted into Union. The first semester he was on academic probation and the second semester, he made the president’s list.  He never would have made it without the support of his wife, he said.

I asked him what his claim to fame is now. He said, “I guess my claim to fame is right now that I’m Cooper and Annalia’s dad.” Cooper wants to be a paleontologist. He wants to see as many random things as he can. Cooper makes instant friends with everyone. He is not shy at all. When they were vacationing in Chicago, Cooper would shake hands with people in the elevator saying, “Hi, I’m Cooper, we’re in room so and so!”

I asked about his proposal to his wife. He said he asked her before he got the ring. He wanted to make sure she said yes before he bought it. Dusty’s mom used to have a fish pond in the backyard. He was in the house, just he and Beverly and his mother. He said to Beverly, let’s go out and feed the fish. His mom is thinking, he never wants to go out and feed the fish. He had a fake rose stuck into the ground with the ring inside of it. Dusty tells Beverly to pick it up. She said, “I’m not picking it up!” She was thinking his mom had put it there. She finally picked it up and opened it.

She liked it and she lost the diamond out of it, a couple years ago he bought her a new diamond. He said, “Will you marry me again?” She said, “I don’t know I’ll have to think about it this time!” 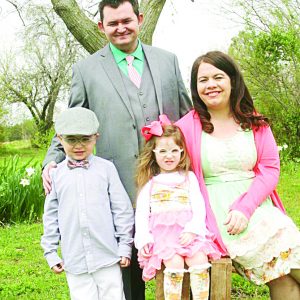