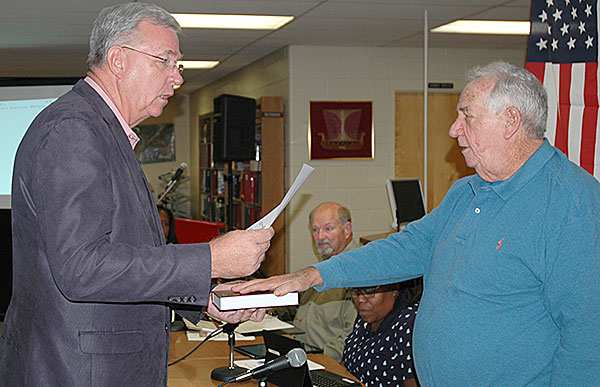 GRAY SWORN IN – Newly appointed school board member, Terry Gray (right), gets sworn in prior to the Humboldt School Board meeting last Thursday evening. Mayor Marvin Sikes administers the oath of office. An hour and a half into the meeting, Gray resigned his position on the board and walked out the door.

Within a matter of minutes of being sworn into office, the new school board member resigned before the meeting was over. Former high school history teacher, Terry Gray, was sworn in last Thursday night, but into the second hour of the two-plus hour meeting, he stood up and announced his resignation.

Gray was appointed to fill the vacated school board member seat after Lori Coleman resigned and moved out of state.

Terry Gray stood up about an hour and a half into the meeting, went to his wife, who is also a former teacher and whispered in her ear. Gray returned to the board table, gathered his tablet and papers.

“Pardon me, this is a whole lot more than I want to get into,” Gray announced to the board. “I resign.”

Then he walked over to Central Office’s Cindy Love and laid the tablet on the table where she was sitting.

Dianne Hammond had finished her part of the program explaining the complexity of TNReady, followed by East Elementary School principal, Brittanie Doaks with her action plan to continue the good work. Newman was the final portion of the presentation.

“Education is not what it was when I was a teacher,” Gray said after the meeting, regarding the complexity of TNReady testing. “I didn’t want to take the time to analyze the data. It was like I had never been in education.”

Gray also alluded to his health afterwards. Gray said his doctor told him he had three years left to live; that was four years ago.

“That’s not how I want to live out my life, relearning about education,” Gray noted.

“You could’ve heard a pin drop,” Dr. Hamlett said afterwards of Gray’s resignation. “We were all stunned.”

After Gray’s departure, Newman continued with his presentation. Throughout the entire presentation, school board member Leon McNeal would interrupt the speakers, making comments, asking questions and often times getting off subject.

McNeal did not want to purchase computers. Dr. Hamlett explained that TNReady testing is done on computers. He made a derogatory remark about students not being able to read or write, so why would they need computers.

Humboldt High School received a $175,000 grant from Tyson Foods to purchase laptop computers for the students. The school system had just received the check earlier in the week.

“You can give them all the computers they want, but when they put that computer down, they got to do that math or something,” McNeal ranted. “We got a problem. Computers is what’s going—I’ve got three or four at the house. I ain’t got no problem with that. I got a problem with them graduating when they can’t read or do math. I’m just keeping it real. We keep talking about computers without dealing with the reality.”

“We are dealing with the reality,” Dr. Hamlett replied. “You don’t see the action plan?”

While Dr. Hamlett was talking, defending what the school staff is doing to improve, McNeal kept interrupting her response, hounding about computers and kids not being able to read. She asked Newman to continue with his presentation at which time McNeal packed up his stuff and walked out of the meeting, still mumbling that kids don’t need computers when they can’t read. As McNeal was heading toward the door, some in the audience applauded.

Later in the meeting Kimberly Boykin spoke, calling out McNeal for his actions.

“We need technology,” Boykin said. “Kids need to know how to send an attachment, work in Excel.”

“We have to support the school board, the superintendent,” Boykin said. “If a school board member wants to act like a donkey and walk out causing disruption, we need to figure it out. Like the mid-term, like Mr. Gray getting up and resigning, we need to get rid of that person and find somebody who wants to work on this school board. Somebody like Michalena Koonce, she’s actually in your district (talking to Alderman Don Graves who attended the school board meeting). She’s very good, a very involved mom.”