“This is just a wonderful place to work,” Pruett said.

Pruett is currently in his eighth year as director. He was hired in 2011 on a three-year deal that he renegotiated after the first year. His two subsequent contracts have also been three years in length.

Pruett’s new contract includes a base salary of $117,000 per year, insurance and retirement. The district provides him with a vehicle and $125 per month for a cell phone. Under the new terms, Pruett will receive the same percent salary increase as certified employees and is also eligible for an additional 1-percent raise if he receives a composite evaluation score of 3 or higher on a 1-5 scale.

The board completed its most recent evaluation of Pruett in September, scoring him 4.26.

Pruett said he wants to see the district grow its Career Technical Education program during the next four years.

“I think we can ramp that up,” he said. “We have a large number of students who have the opportunity to go to [Tennessee Colleges of Applied Science] that aren’t taking advantage of that opportunity.”

Pruett and his wife have two sons. Alex is a freshman at South Gibson Co. High School, and thanks to the board unanimously approving Pruett’s new deal, will receive his diploma from his dad. Clayton is a fourth grader at South Gibson Co. Middle School.

“The kids in this district are just awesome,” Pruett said. “The teachers pour their heart and soul into what they do. We have support from the community. Our board does what’s best for kids.” 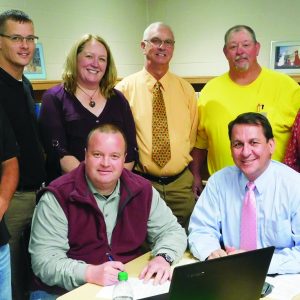