Despite temperatures in the 90s, Davy Days kicked off its week of events with opening ceremonies Sunday at the cabin. Committee member Alan Abbott welcomed all residents and visitors, and Jimmy Hopper led the crowd in prayer.

Abbott thanked everyone for their hard work and dedication to Davy Days and introduced Victoria Abbott to sing the national anthem.  Abbott also gave recognition to Joe and Sue Bone for all their years of service. He asked that everyone remember them in their prayers due to some health issues.

Boy Scouts Troop 243 of Dyer led the crowd in the Pledge of Allegiance and raised our beautiful American flag to be saluted.

Rutherford Mayor Bob White greeted everyone and thanked them for coming to celebrate Davy Days.  White spoke of his hopes for a very successful week and invited everyone to come to community night and enjoy free hot dogs, drinks, jumpers, and many more activities for the whole family.  White also has asked the community for volunteers to keep the cabin open for visitors a couple of hours a day.

Special guests from overseas were in town filming the opening ceremonies.  The two-woman film crew of The French and German Culture TV has been tracing the life of Davy Crockett and Rutherford was one of their last stops. Rutherford will be featured in their documentary.

Dorothy “Dot” Loggins, Davy Days Grand Marshal and Rutherford’s oldest living resident, was present with her daughter. The two sat side-by-side under the cabin porch and waved at the crowd.

Students of all ages from Rutherford School performed the “Ballad of Davy Crockett” with help from Rachel Abbott.  Many of the children braved the heat wearing coonskin caps just like Davy would have worn.  The crowd then joined the kids in singing “God Bless America.”

After a very successful opening ceremony, the crowd was treated to homemade vanilla and strawberry ice cream.  The ice cream was a big hit with the heat index soaring.

Please be sure and attend all of the great community activities that are happening this week and see what a true Tennessee treasure looks like. 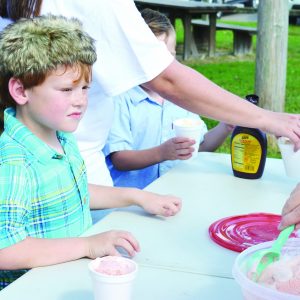