Dorothy “Dot” Loggins recently received the surprise of her life.  Davy Days committee members bestowed the coveted title of Grand Marshal upon her.

“There weren’t any better choices than Mrs. Dot.  We didn’t even really consider anyone else, and it was just meant to be.  Mrs. Dot will be 99 years old on December 7.” said committee member Rhonda Poore,

Rhonda called to tell Dot’s daughter in California of the news before she told Dot.  “Do not let her say no.  She will try,” laughed daughter Sharon Gilbert.

Dot is a lifetime resident of Rutherford and grew up in the Bells Chapel Community. She finished school in the 10th grade because that’s as far as the school allowed.  She knew her husband Ruben Loggins Jr. way before marriage because he grew up right down the road from her.

The two married in Corinth, Miss. in 1942 while Ruben was enlisted in the U.S. Air Force. Dot recalled that one Christmas as a newly wed, she was only allowed to see her husband through the fence as he was deployed overseas.

In 1948, the two welcomed their only child, Sharon Lee Loggins, into the world.  They were and still are very proud parents. Dot spoke of the special relationship that Sharon had with her maternal grandfather from the moment he saw her in the hospital. “I can’t wait until she is big enough to cry to go home with us,” said Pa.

Dot stayed home with Sharon until she was nine. She then went to work for Kellwood.  Dot remembered the construction of Kellwood. She said the Rutherford gymnasium was set up with certain machines that they would be training on so they could be ready when the facility opened.

When you live to almost be a century, you see much more than most. Dot watched the doors open to her job at Kellwood and then watched them close not long after she retired.

Dot lost her husband in 2000, and she has spent almost the last 20 years taking care of herself and the home she and Ruben built in 1954.

When asked about her doll collection in her dining room, Dot proclaimed, “I never actually told anyone that I collected dolls. People just thought I did and those dolls just kept showing up.”

She does, however, have one particular doll that she asked Ruben to buy her for Valentine’s Day. She said this doll was too cute to pass up and has a particularly special meaning since his passing.

Dot still drives downtown every Thursday for her hair appointment with Cathy and to the dollar store. She sometimes goes out on a limb and drives to Dyer to see her sister-in-law but that’s “really pushing it,” said Dot.

Dot and her daughter have plans for some major shopping when she arrives home from California for Davy Days events. The two plan to get some new outfits for opening ceremonies, the grand marshal reception, and the parade.

Dot is looking forward to spending time with her daughter and enjoying all that Rutherford Davy Days has to offer, except at a little slower pace. She says that she doesn’t get around like she used to.

Mrs. Dorothy “Dot” Loggins is a true testimony to grace, hospitality, and humility. Davy Days is honoring a great lady that has stood the test of time, literally. 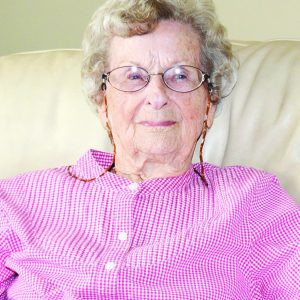