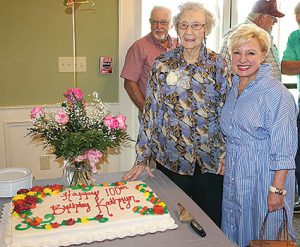 Not everyone gets to reach the age of 100 and when it happens in Humboldt, people are eager to celebrate that milestone. The most recent Strawberry City resident on the cusp of reaching the centenarian club is Kathryn Tyler.

Tyler was born September 19, 1918. Last Saturday a celebration in her honor was held at Cades Center. The balloon bouquet decorated tables in the dining hall were encompassed with people eager to greet and offer well wishes to the birthday girl.  The line to Tyler was long and filled with smiling faces.

Of course, Tyler had a beautiful cake to commemorate her feat. The cake table too, had balloons, dozens of flowers as well as other snacks and drinks.

Too often, when someone reaches advanced years, they feel lonesome, having outlived many of the friends and family they spent the majority of their life with. Tyler, however, has made quite an impact on the community and she has people of all ages who still loved and admire her.

Tyler and her late husband, Lancaster Tyler, were very active in the Humboldt Church of Christ.  The couple also built and ran the famed Tyler Tower Motel and Restaurant. They were active philanthropists with two buildings at Jackson Christian School and one at Freed- Hardeman University, named in their honor.

The marriage between the two produced one child, Linda, who passed away at age 12. Tyler said they were lonesome after the death of their beloved daughter.

While in college, attorney Dwight Hawks went to work for the Tyler family. Tyler recalls Hawks’ mother being ill when he came to work for them. She also recalls his mother passing during those years. Hawks continued to work with and for the couple for many years.

“We helped each other,” she said.

Hawks’ recollection involves the realization that the Tyler couple was a team of visionaries. In the early 70s the trio became a partnership. “They saw in me the ability to make their ideas happen and to work financially,” Hawks recalled fondly. “It was a sound business relationship and a good friendship.”

Hawks also added that they were mentors to him.

When thinking on some of new ideas the Tylers had, Hawks told how prior to their installing self-serve grocery stores in Humboldt and Dyersburg, the grocery stores in this are were all full-service, meaning store clerks would gather for you each thing on your list.

Tyler is doing well physically and otherwise. She will greet a stranger with “Hey girl!” She can move around well. Her only complaint is that she has forgotten a few dates.

Tyler said that Hawks has made such a difference in her life. She said he is like a son to her.

When asked what she believes is the secret to a long life, Tyler replied, “Doing what’s right! I love people and want them to love me back so I practice doing unto others as I would have them do unto me.”

After Saturday’s requisite singing of the Happy Birthday song, Tyler exclaimed, “I love every one of you.” 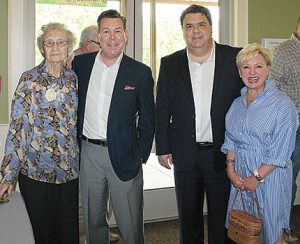 TYLER CELEBRATES 100 YEARS – Last Saturday Katherine Tyler (from left) was joined by Cliff Hawks, Tyler Hawks and Jackie Hawks as the community came together to celebrate her upcoming 100th birthday, which will be Wednesday, September 19, 2018.