This is the first in a series of articles devoted to people that are in some way making a positive impact in some area of endeavor.

For this article, I selected Fire Chief Ryan Shanklin and firefighters Brandon Rudd and Jessica Rudd.

Jessica Lynn Rudd is a fully certified firefighter on the Dyer Fire Department. Jessica is the daughter of Kathy Page Ford and William Ford. Jessica grew up in Bradford and moved to Dyer when she married Brandon Scott Rudd.

Likened onto the great lovers of history, Brandon asked Jessica to marry him in a unique way. He spelled out “Will you marry me?” with rose petals. They married May 19, 2012 at New Concord Baptist Church in Kenton. They went to Gatlinburg on their honeymoon.

Jessica was never around firefighting until she met Brandon in 2006. Her first job out of high school was working at Sonic in Trenton. That’s how she met Brandon.

She didn’t really take an interest in firefighting until about four years ago. She would go on calls with Brandon but would stand back and just watch. Brandon has been with the fire department for 14 years.

She said, “I just wanted to be a part of it, to be able to help people. So they got a class up and I almost backed out because I didn’t think I could do it. Everyone on the fire department was so encouraging. They kept saying, ‘You can do it, you can do it.’”

She completed the training, the live burn, everything. Although finished with her primary training, they still train once a week.

Jessica said, “The only thing I can say about women firefighters is that women can be firefighters. If you really and truly want to do it, anyone can do it.”

She graduated high school in 2007 at Gibson County. She is in Jackson State now working on a degree as a Registered Nurse. Brandon and Jessica have two daughters, Madison and Elizabeth.

Brandon is a First Responder and Jessica wants to qualify in it as well.

Fire Chief Ryan Wayne Shanklin is the son of Billy Wayne Shanklin and Sherry Myers Shanklin. Ryan grew up in Union City. He worked for E.W. James as his first job out of high school. He hired in at the Milan Fire Department in 2001.

Ryan’s primary employment now is State Arson Investigator covering West Tennessee. He started out working for the Bradford Fire Department, then the Kenton Police Department, and the Gibson County Sheriff’s Department. He worked his way up to detective and then hired on with the state in 2014.

Shanklin said his department is averaging about 500 calls per year, which includes medical calls. Shanklin said their average response time is 4.97 minutes. It’s the time from when the pager goes off until the first truck arrives on the scene. For a volunteer department, this is an amazing time. The national average is 6.5 minutes.

Shanklin is married to Ashley Oliver Shanklin. She is the daughter of Ricky and Deanna Oliver. She was Ryan’s first date. Ryan and Ashley’s daughter, Allie, just turned six years old. That was the proudest moment of Ryan’s life when she was born.

Shanklin is in Bethel University now working on a bachelor’s degree in Criminal Justice. He will graduate in December. 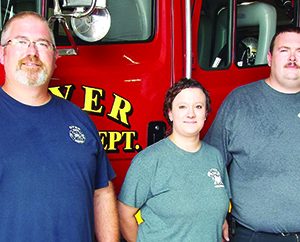