If you happened to be driving on Hwy 45E between Three Way and Medina, you may have thought your eyes were playing tricks on you. A convoy of trucks and machinery were chugging along, grinding and paving the highway. 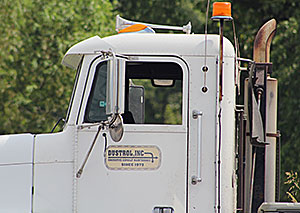 WHERE IS THE DRIVER? – This semi-truck is one of 14 pieces of equipment used to grind and pave Hwy. 45E between Three Way and Medina last week. The vehicles in the train are un-manned and driven using remote controls, except for the final unit of the convoy, the paving machine, which has a driver onboard.

What was most strange is that none of the trucks had drivers—at least not behind the wheel. Workers use remote controls to steer, guide and adjust the speed of the trucks while walking beside the vehicles. The only unit in the train with a driver in the vehicle is the final unit, the paving machine.

Dustrol, Inc. out of Towanda, Kans. was contracted by Tennessee Department of Transportation to recycle and pave the highway. The process is called Hot-in-Place Recycling.

Brian Hansen, president of Dustrol, explained the process. A line of trucks is used to produce the final product.

First in line are two trucks with propane tanks that heat the asphalt. A half-inch of asphalt is milled from the road and pilled into windrows in the center of the lane. In total, four sets of propane trucks and millers run back-to-back. The end result is a large row of ground pavement.

From there, the last unit in the train has an oil tank and a polymer-modified asphalt rejuvenator is blended. An elevator is used to transfer the end product into a conventional paving machine where a finished layer of pavement is laid.

Hansen said a different contractor hired by the client performs the final step of the process. It could be a finished coat of pavement or simply sealing the pavement laid by Dustrol. He wasn’t sure which method TDOT will use.

Dustrol isn’t your typical contractor. They actually engineer and build their own equipment, custom made for their scope of work.

CONVOY – This train of paving equipment turned a lot of heads last week while working on Hwy 45E between Three Way and Medina. A total of 14 units ground up the existing pavement, piled it up and mixed it with a rejuvenator that was put into a paving machine. The end result is a freshly paved road. All the vehicles in the train have no drivers except the final paving machine. The vehicles are remote controlled by workers.

Hansen noted that 100-percent of the ground road is recycled, which is good for the environment. Plus the material doesn’t have to be hauled off and dumped in landfills or in other locations.

According to crew supervisor Robert Boyce, the group will be working on one lane at a time, stretching in sections from Medina to Three Way. The convoy could be working in the area for the next few days, so drivers are asked to pay attention to workers and other vehicles on the roadways in order to remain safe.

Boyce said that TDOT crews should be wrapping up their work by 6 p.m. each day.

If you haven’t seen this outside-the-box type paving before, take a short drive between Three Way and Medina and see for yourself. But you best hurry, the train of trucks and equipment can work two to four lane-miles in a day.