Representatives from the Dowland Hall Farm, E.H.M. Farm, Harris Family Farm and Flowers Farm received plaques recognizing their farms as Tennessee Century Farms. The Tennessee Century Farms Program was created in 1975 by the Tennessee Department of Agriculture as part of the nation’s bicentennial celebration. The primary focus is to continue honoring and recognizing the dedication and contributions of families who have owned and farmed the same land for at least 100 years.

Located in the Brazil community, the Dowland Hall Farm was founded by J.W. Dowland in 1890. J.W. raised cotton, corn, wheat, strawberries, cabbage, vegetables, orchards, cattle, hogs and poultry on the 20 acres. He and his wife Idella had five children, and in addition to managing the farm, J.W. served as postmaster for Brazil. Daughter Ida was the next generation to own the farm. She purchased the other interests from her siblings. The third owner was James Wilson Hall, J.W.’s grandson. He and his wife Jo had four children – Sandra Hall Arnold, James Wilson Hall Jr., Richard Gene Hall and Robert Barker Hall. The family produced cotton, soybeans, corn and cattle.

Sandra is the current owner. She and her husband John Arnold have two children – Melissa JoNell Arnold and John Richard Arnold Jr. The farm, which over the years has expanded to 150 acres, currently produces cotton, soybeans and corn. Bob Holder and his grandson Jeremy Young work the land.

Located in the 4th Civil District, the E.H.M. Farm was established in 1892 by Houston Ezell. The 50-acre farm produced corn, tomatoes and cotton and raised cattle and mules. Married twice, Houston fathered four children. In 1953, his son Earl became the second generation to own the farm. Ruth Kilzer Hudson, Houston’s granddaughter, acquired it in 1985. She and her husband Robert have three daughters – Donna, Nancy and Shelia. Nancy and her husband Eddie McClellan acquired 30 acres in 2005. They and their son Clint live on the farm and raise calves. The farm takes its name from the last names of the three generations of owners – Ezell, Hudson and McClellan.

Harris Family Farm is located west of Rutherford in the Tyson Store community. T.C. Howell purchased the 74 acres in 1911. He, his wife Mollie and their son E.C. grew corn, cotton, wheat and soybeans. In 1920, E.C. acquired the farm and continued to produce similar row crops. He and his wife Vera had one daughter Edith. Edith and her husband Jim Kay acquired the farm and continued to work it until 1967 when their daughter Mildred and her husband W.E. Harris began farming. They expanded the farm to 191 acres and also began a hog operation. The couple had two sons – Kenneth and Edward.

After farming alongside Kenneth, W.E. retired. The Harris family then began renting the farm. Today, Kenneth manages it with tenant farmer John Gregory producing corn, wheat and soybeans. Kenneth also enjoys growing a vegetable garden each year. He and his children Tiffany and Kasey own the farm.

The Flowers Farm was founded April 24, 1869 when Montezum Jones sold Isaac Reagor a tract of land. In 1870, Isaac died, and his son paid the $900 balance Isaac owed. R.W. bought out of all his siblings for $660 in 1876. Upon his death, the farm was deeded to I.H. Reagor. Later, the farm was transferred to Maurice Reagor, to Floy then Eleanor, mother and grandmother to David and Jearod Flowers. Jearod, current owner, still actively farms the land in row crops and lives at the original homeplace. 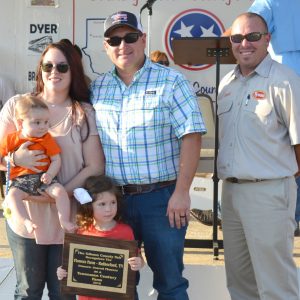