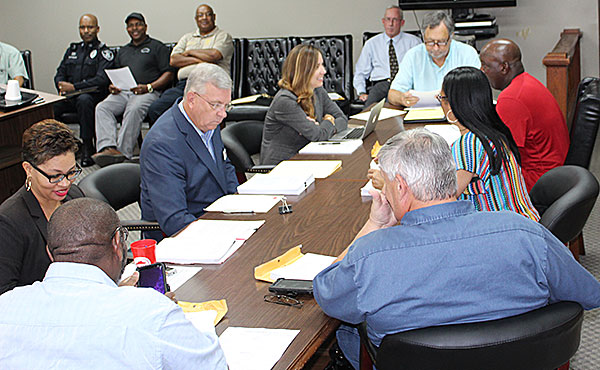 TACKLES BIG AGENDA – The Humboldt Board of Mayor and Aldermen tackled a large agenda at their August 27 meeting. Items included resolutions, ordinances and a credit agreement, all to aid in the upgrades at Humboldt Utilities to provide services to the Gibson County Industrial Park. The board also approved hiring two new police officers and two new street department employees.

Humboldt officials are taking proactive steps to protect homeowners’ property values. Last Monday night during the city board meeting, aldermen approved the first reading of a zoning amendment requiring single dwelling houses to be a minimum of 960 sq.ft.

The ordinance was presented after inquiries at the mayor’s office about tiny houses. Tiny Houses are becoming popular across parts of the nation thanks to several television shows focusing on buying or building the small structures.

During a previous board meeting, tiny houses were discussed but there were too many questions left unanswered. The board asked city attorney, Terri Crider, to research what can and can’t be done to regulate tiny houses from popping up within the city.

At Monday’s meeting, Mayor Marvin Sikes presented Ordinance 2018-06, an ordinance to amend the zoning ordinance of the city of Humboldt, adopting general dwelling standards. The ordinance stated single-family dwellings must be 950 sq.ft. and two-family dwellings 800 sq.ft. per unit.

But Alderlady Donna Johnson said the zoning board had revised the document and increased the square footage to 960, 10 more sq.ft. Johnson also noted the zoning board eliminated section (c) of the ordinance, which states, any hitches or towing apparatus, axels and wheels attached to a structure must be removed prior to a structure being occupied as a dwelling.

Alderman Don Graves said this (ordinance) should be handled by Humboldt’s planning commission. He noted the same goes for mobile homes.

Mayor Sikes said the ordinance is for dwelling standards and does not pertain to manufactured housing.

Johnson said the zoning board thought 1,000 sq.ft. should be the least amount for a house but Crider said there were cases where that amount of square footage had been challenged in court and won since state and federal law designates 1,000 square feet by law.

This is why the 960 number was conceived.

“The whole thought is to eliminate tiny houses legally,” Johnson noted. “We have to be legal but be reasonable.”

Johnson said according to tax records, there are over 300 houses in Humboldt under 960 sq.ft. Those houses would not be affected by the amended zoning ordinance since they already exist. The ordinance would only affect to new construction.

Graves said he did not want a house trailer or tiny house in his neighborhood. He added that other members of the board probably don’t either. Graves still maintained the planning commission has authority to deny tiny housing in Humboldt.

The first reading of Ordinance 2018-06 was approved 4-1 with Graves casting the lone nay vote.

“Humboldt Utilities is getting ready for the Tyson plant (Gibson County Industrial Park) and the hatchery (Humboldt Industrial Park),” Smith told the board. “We’re going to spend $6.5 million on upgrades.”

Smith continued on how monies will be transferred from one departmental fund to another in order to have the funds available. He noted each department stands on its own—gas, water, electric and sewer.

A credit agreement (loan) with Commercial Bank and Trust Company to bond $3.5 million with an interest rate of 3.7-percent was presented to the board.

Board member Leon McNeal asked Smith if Humboldt Utilities talked with the local banks to secure the loan.

The board unanimously approved all three resolutions and the credit agreement

The board unanimously approved hiring both police officers.

•The board approved a beer permit application from Thelma Carolina Rodgers who will operate the Wagon Wheel located at 114 S. 13th Ave.

•Mayor Sikes made a recommendation to the board to accept the transfer of the old Stigall School property from Morning Star Baptist church to the city of Humboldt. The mayor said there is a large L-shaped slab of concrete where the school once stood. The city maintains the property occasionally, keeping it mowed but the grass and weeds still grow wild.

Alderman Bob Pruett asked if property is the gym, to which Sikes said it wasn’t. Instead it is the property across the street from the gym.

Sikes said he and Alderman Leon McNeal approached Morning Star regarding the property and they agreed to transfer it to the city.

“We’re going to bust up that concrete, clean it up and maintain it,” Sikes said. “It’s going to make the neighborhood look so much better.”

There was talk of a park or play area, or possibly parking for the gym. There was even talk of some type of monument honoring Dr. Tom Stigall.

“This is sacred ground,” the mayor said of the site. “Dr. Stigall died there, in that school.”