Gibson County High School lost a heart breaker to the Lake County Falcons at Bill Wray Memorial Field in Tiptonville on Friday night. Gibson Co. football fans got to see a nail-biting, edge-of-their-seats thriller, played with a lot emotion in a 36-28 overtime loss.

Lake Co. got on the board first with an 11-play, 50-yard drive for a touchdown on a 13-yard quarterback keeper by Tanner Snyder with Snyder making the two-point conversion to give Lake Co. an 8-0 lead with 9:27 left in the quarter. The Falcons scored again on an 8-yard run and elected to go for a two-point conversion but failed to make it, extending their lead to 14-0.

On their next possession, the Pioneers went on a 6-play, 70-yard march downfield capped off by running back Ozzy Rico’s 49-yard touchdown run up the middle. The two-point conversion was no good to make it 14-6 in favor of the Falcons.

With 3:47 left in the half, Trey Baker sacked the Falcons quarterback in the backfield for a loss. Two plays later, the Pioneers forced a fumble and De’Andre Snow recovered the ball on the 45-yard line. With 2:05 remaining and Gibson Co., Payton Lamberson connected with Camron McMackin for a 43-yard pass for a touchdown, but the two-point conversion was no good. Lake Co. had a 14-12 lead at the half.

Gibson Co.’s defense opened the third quarter forcing the Falcons to fumble the ball with Stafford recovering the ball at the 37-yard line. On the fifth play, the Pioneer offensive line made a huge hole for Rico to run straight up the middle for a 41-yard gain to the 9-yard line. Four plays later, Rico scored a touchdown on a 4-yard run with Hayden McGuire running in the two-point conversion to give Gibson Co. a 20-14 lead with 6:19 left in the quarter.

The Falcons tied the game at 20-all with a 19-yard touchdown run by Snyder, but the two-point conversion failed.

Gibson Co. opened up the fourth quarter, scoring a touchdown to take a 28-20 lead. The Pioneers’ drive started at the 40-yard line. Gibson Co. moved the ball down field behind runs by Lamberson and Rico. Lamberson completed a 33-yard pass to Cantrell for a first down at the 9-yard line. Rico, with back-to-back runs, moved the ball to the 1-yard line. Lamberson, on a quarterback keeper, scored on a 1-yard run with Caden Wylie scoring the two-point conversion.

Both teams were forced to go three plays and out on their next possessions, but the Pioneers had a bad snap for a loss of 16 yards that resulted in a safety to make it 28-22 Gibson Co.

With 5:10 left in the game, Lake Co. was facing 4th-and-three that resulted in a 27-yard quarterback keeper for a touchdown to tie the game at 28-all.  Neither team was able to score for the remainder of regulation, sending the game into overtime.

The Falcons won the coin toss in overtime and received the ball first at the 10-yard line. Lake Co. scored to take a 36-28 lead. Gibson Co. started from the 10-yard line with back-to-back runs by Jake Patterson. The Pioneers fumbled the ball on the next play, and Lake Co. recovered to win the game 36-28.

Although the score indicates that the Pioneers came up a little short, what should not be forgotten is how the Pioneers played with Lake Co., one of the top ranked teams in West Tennessee, on its home field.

Gibson Co. Coach Cody Finley said, “The boys came out and played hard with emotion all night long. I was proud of the team, how they kept battling and fighting back in the first half. As a team, we have put together two good games. We need to continue play with that effort.”

Gibson Co. had 214 yards rushing and 76 yards passing for a total of 290 yards and also had 21 first downs. Senior running back Ozzy Rico was named the Pioneer Player of the Week. He had 18 carries for 147 yards with two touchdowns, averaging 8.2 yards per carry. See GCHS Scoreboard below sponsored by Subway.

Leading in offense were Jake Patterson with five carries for 43 yards. Payton Lamberson finished with 10 carries for 16 yards and a touchdown and was 2-for-7 passing for 76 yards. Colin Warren had two carries for 8 yards. Camron McMackin had one reception for 43 yards with a touchdown, and Will Cantrell had one catch for 33 yards.

Gibson Co. had seven penalties for 47 yards, and Lake Co. was penalized five times for 45 yards. 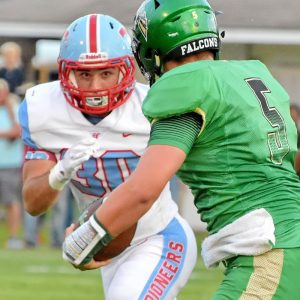