For the second time in five days, emergency personnel responded to the State Route 5 and Broad Street intersection in Dyer to a multiple vehicle collision.

The accident happened around 7:30 a.m. Wednesday and shut down State Route 5 southbound lanes for about an hour and a half.

According to the Dyer Police Department, a 2016 Nissan 4-door Hatchback occupied by four people was traveling west on West Broad Street, while a 2016 Chevrolet Cruze was traveling southbound on State Route 5. The driver of the Hatchback, Jaclyn Baker, failed to yield the right of way onto State Route 5 and crossed in front of the Chevrolet Cruze. As a result, five people suffered minor injuries and were transport by Gibson County EMS ambulance to Dyersburg Hospital.

The City of Dyer officials, working alongside with TDOT and State Representative Curtis Halford, are looking into ways to make the intersection safer. The city upgraded the stop signs at both intersections a couple years ago.

“People are just not stopping, they are rolling through the intersection,” Dyer Mayor Chris Younger said.

Local residents have suggested a caution light, decreasing the speed limit on the 4-lane, have an intersection like the one at Bradford, make a 4-way stop and several other solutions.

“We are exploring several different options,” said Younger. “But anything we want to implement TDOT will have to approve of.”

Younger has sent a letter to state requesting the lowering of the speed limit within the city limits and TDOT has recommended more signs and some LED lighting.

“Dyer Police Department will be patrolling State Route 5 and enforcing all traffic laws,” said Dyer Police Chief Brad Lindsey. Younger would like to remind everyone to stop at both lanes before crossing at State Route 5 intersections. 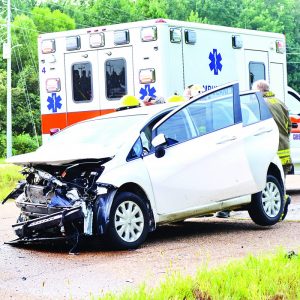