The 25th Annual International Washer Pitchin’ Contest is in the history books. The event was held August 18 at Yorkville City Park, was well attended and was a successful fundraiser for the Yorkville Fire Department.

David McKay of Jackson, Mo. won first place in the singles contest for the second year in a row. He received $250. Dickie Tinkle of Dyersburg was second place and received $100. Tinkle also won $100 for throwing a “quad,” which means he got all four washers in during his turn. Cody Hamilton of Memphis finished in third place, and Dale Shelby was the fourth-place contestant.

Caleb Reynolds and Chase Reynolds won the doubles competition and received $125 each. Carlos Draffin and Cody Hamilton finished in second place and received $50 each. Ed Arras and Eddie Arras were the third-place finishers, and Dale Shelby and Chris Spangler finished in fourth place.

There were 46 single players in the competition, and 26 teams participated in the doubles competition.

Opening ceremonies were held in the community center with Yorkville Fire Chief Mike Norman welcoming everyone and thanking them for coming out to support the fire department. Bro. Travis Davidson gave the opening prayer, and Carly Thompson sang the National Anthem. Yorkville Mayor Mack Zarecor thanked the Yorkville Fire Department for their time and many different things they do for the community. Norman thanked all the sponsors, volunteers and Sheriff’s Department for their help in making this event successful.  He gave a special thanks to all the Yorkville firefighters and their families for the sacrifices they make daily for the department and this event.

“They really surprised me,” said Zarecor. “I lived my whole life here in Yorkville. I just love this town and all the people in this community.”

She has only missed one of 25 years working the International Washer Pitchin’ Contest and that was because she had total knee replacement. Tammy has spent countless hours not only organizing but cooking, mopping, cleaning the kitchen and keeping everything running smoothly. Tammy is marred to Mack Zarecor; they have three children, Andy, Chad and Kait. 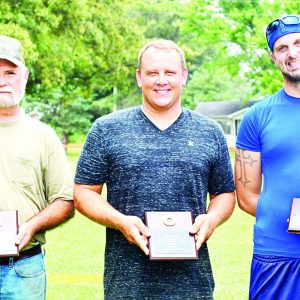