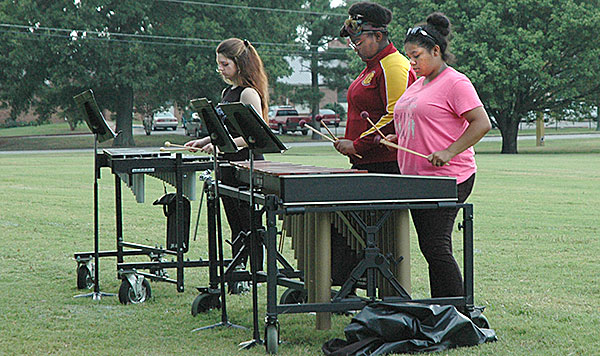 The Humboldt Jr./Sr. High School “Pride” Band participated in band camp this past week to get ready for their fall show. Music in this year’s show is upbeat, fun and sure to please the crowd.

Viking Fans will be in for a real treat at this year’s football games as the Humboldt Jr./Sr. Pride Band has doubled in size since last year. This is not the only huge announcement. The band will also be refocusing their show this year and will provide the fans with a modern, entertaining, crowd pleasing performance.

The Humboldt Pride band has a lot to be proud of so far this year. They ended band camp this warm week with a trip to Murfreesboro to the Drum Corps International Performance as a thank you to the band for their exceptional dedication during camp. 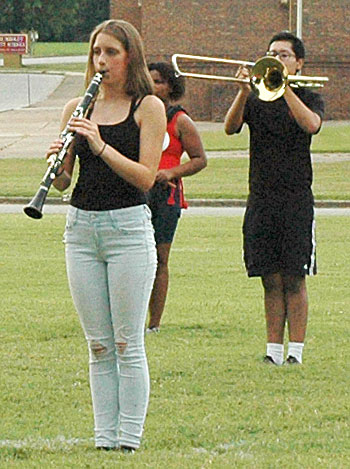 With the temperatures soaring high during the day, camp included inside section practices throughout the week and full band practices from 6-9 pm.

This year’s band has quite an exciting year of rebuilding and refocusing, according to band director Heather Glenn- Hoekstra. This year alone the band has doubled in size, contains seven seniors and welcomed many new faces and a few who took some time off. The growth has been exponential and the band has been able to welcome back their pit section, which was non-existent for the past five years.

Leading the band this year is the talented Director Heather Glenn- Hoekstra, and Assistant Director Delaney Naffzigger. John Glenn-Hoekstra is also assisting. With seven seniors strong, the leadership in the band is more capable than ever as well as passionate. The 2018 captains are Eli Coronado and Calista Beard. First Lieutenants have also been established as Lucas Williams and Jamie Gilman.

The bands excitement doesn’t stop there, with the continued growth, and the focus on building the program, this year they will not compete at competitions. Instead they are going to be performing a more unique, original showcase. “The showcase will be performed on Friday nights, and will feature more college style, fun, upbeat music from the early 2000s to today’s hits, “ Nafzigger said. It will be thrilling and crowd enticing.  It will include Beyoncé’s “Crazy in love”, Fitz & the Tantrums “Hand Clap”, “Havana” by Camilla Cabello and finishing strong with “Bang Bang “by Ariana Grande, Nicki Minaj and Jessie J. 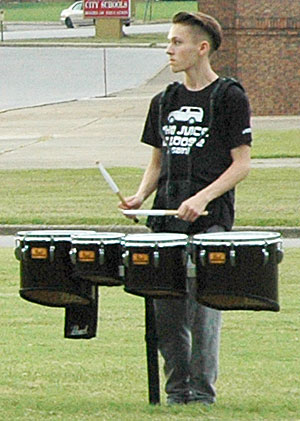 The band will also be holding a fall concert on September 30, 2018, location to be determined. They invite and encourage all the community and sponsors to come attend a fantastic evening.

In this rebuilding mindset, the program directors have also put much time and effort into establishing a 6th and 7th grade band program. This gives the kids time to learn their instrument and really establish themselves in the band before high school even approaches. They have added 50 members already to the 7th grade and they are confident many more will peak interest once school starts back.

All the directors are beyond proud to see the progress already made in such a short amount of time but they still have clear ambitions that they would like to achieve as well. “ My mission for this band program is to show these students they can be successful with music outside of the band,” said director Glenn-Hoekstra. 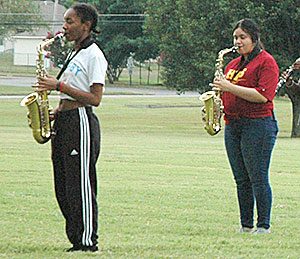 “I want them to know that they can take these skills out into the world and confidently perform anywhere. I also seek for them to see the opportunities music can provide from scholarships to chasing down their dreams. Most importantly I seek for my students to see and know that they are in a program with people and a community who truly care for them. We will go above and beyond to ensure that our students and our program grows in the right direction, and that they have the means to be successful”.

Glenn-Hoekstra and Naffziger also stated a few of their goals for this year for the Humboldt Vikings Pride Band.

“With a growing program, growing donors are needed”, said Neffziger. “We are looking at re-establishing the parent and community support band booster program. We will be holding meetings the second Tuesday of every month and discussing needs and ambitions of this vital program.”

For more information on being a band booster please call the school and ask for any of the directors.  They also emphasized that establishing alumni relations is also a huge priority. 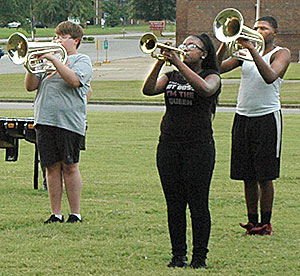 “We know how important alumni are and we want them involved”, said Glenn-Hoekstra. Program ideas are currently being discussed and will be announced once decided.

The Humboldt Pride Band is proud to entertain the community this year. They have worked long, hard hours at band camp and have grown their talent and numbers at a superior rate. They are thrilled for this upcoming season, and look forward to your support whether it be cheering them on at football games, coming to concerts, or sponsorship.