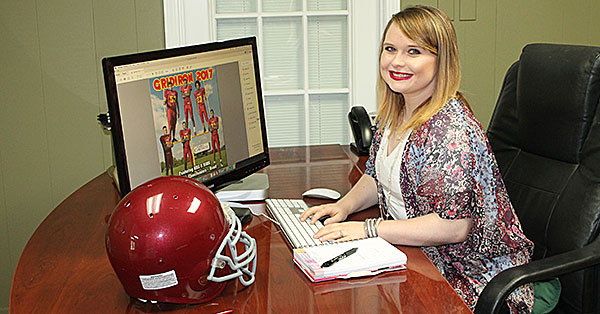 NEW SPORTS WRITER – Amber Adams is the new sports writer/photographer for the Humboldt Chronicle. Adams looks forward to the upcoming football season and other sports season this school year.

The Humboldt Chronicle is proud to introduce Amber Adams as the newspaper’s new sports writer and photographer. Her first day on the job was Monday, July 23.

“After searching for the right person over the past few weeks, I believe we’ve found her,” said Humboldt Chronicle Editor Danny Wade. “Amber was very impressive during her interviews. She’s excited to join our team and we’re thrilled to have her on staff.”

Adams was born and raised in Humboldt, and attended school in Medina until her senior year when she moved to Henderson. She graduated from Chester County High School in 2013.

Adams currently attends Western Governors University where she is finishing a Bachelor’s Degree in General Education with plans to follow up with a Master’s Degree in English.

At WGU, she maintained a 4.0 GPA. Adams has also worked in retail and management positions in the area.

“Throughout my schooling I was very involved in sports, participating in soccer, cheerleading during football and basketball seasons, and summer league softball,” Adams said of her love of sports. “I was also involved in journalism, drama club and the student ambassador program.”

Adams takes over a position previously held by Barry DeLoach. DeLoach covered sports for The Chronicle for 21 years before resigning in June.

“Barry was a valued member of the Chronicle family for decades,” Wade noted. “He leaves some mighty big shoes to fill. Barry knew the ins and outs of sports and had good working relationships with all the coaches. That said, I have little doubt in Amber’s ability to step right into those shoes. It will take some time to fill those shoes but I fully trust she is capable.”

“Writing and literature have always been a passion of mine since my early school days,” said Adams. “I have always enjoyed documenting through words life’s events, as well as having a hobby of poetry.”

Adams says her goal is to provide the parents, grandparents and fans who may not be able to attend every sporting event, a way to really be able to see the event and feel the energy without actually being there.

“I found my love for photography while in high school in the journalism program,” Adams added. “I absolutely enjoyed photographing the action moments of sporting events. Capturing the emotions and fast paced environment was always thrilling.”

Wade and the entire staff are proud to have Adams join their team. She will be meeting with all the Humboldt coaches and staffs very soon as she gets to know them and the athletes she will be covering in the sports pages of The Chronicle.

“I have always had a great love and respect for sports, and truly look forward to covering the Vikings this year,” Adams said. “I’m so thankful for the opportunity and know there are big shoes to fill. I am so excited to work and be apart of the Chronicle, and look forward to getting to know everyone of you in the community, while getting some great articles and photography of Humboldt’s youth for many years to come.”