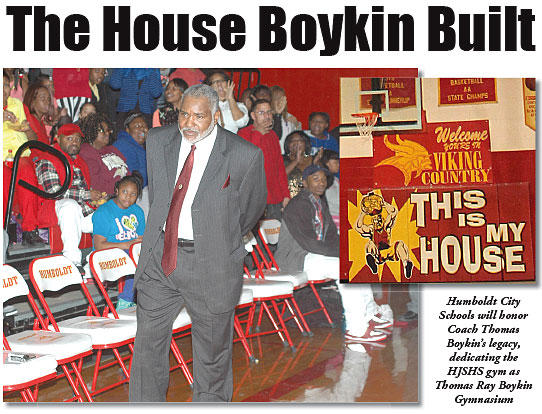 The late coach, Thomas Boykin, may not have been coaching boys basketball in 1977 when the Humboldt High School gymnasium was built, but his Vikings over the past couple of decades he coached are the ones that filled the seats.

Humboldt City Schools is dedicating the HJSHS gym honoring his legacy, naming it the Thomas Ray Boykin Gymnasium in his memory.
Boykin passed away June 23 this year.

“We talked as a staff and coaches,” Dr. Hamlett said. “I got an email from Mayor Marvin Sikes. They were very supportive.”

Coach B was a hometown product of Stigall High School where he played basketball, football and ran track. He graduated in 1969. He received a football scholarship to Lane College but in his high school senior year, Boykin tore up his knee and never played a game after.

“Mr. Thomas Ray Boykin was a phenomenal educator in Humboldt City Schools for over 40 years,” Dr. Versie Hamlett said of Coach B. “His commitment and dedication to our system will be forever remembered.”

Humboldt Mayor Marvin Sikes is pleased that Boykin’s legacy will live on by naming the gym in his honor. The very gym where he spent countless hours teaching kids about basketball and about life.

“I truly believe Coach Thomas Boykin has received his reward for being a fine and obedient servant and follower of our Lord Jesus Christ,” Mayor Sikes read during his memorial service. “The last sentence of the last page of the last chapter was written and God called Coach home.”

The iconic coach was integral in Vikings athletics for 40 years, 17 years as head boys basketball coach. Coach Boykin acted as a father figure and mentor for many of his players.

Trips to Murfreesboro were common for many of his teams and players. In all, Boykin’s Vikings made the trip to the state tournament six times.

The 2013 Vikings defeated Lake County 61-58 for the Class 1A State Championship title and took home the Gold Ball trophy. Boykin received the Coaches Award that year after the State Tournament in Murfreesboro.
Boykin retired from coaching in 2014.

“I fully support recognizing the legacy of our legendary coach, Thomas Ray Boykin,” HCS athletic director, George Yarbro said. “It was his second home for 17 years. He impacted so many students. It’s much deserved.”

“We are proud to demonstrate our appreciation as we honor his legacy,” Dr. Hamlett stated. “I am thankful to the school board and the community for their continued support. We are forever grateful.”

There will be signage, “Thomas Ray Boykin Gymnasium” at the gym. An unveiling ceremony is in the works and will be announced soon so everyone from Humboldt and those who Boykin touched their lives can come and be part of the celebration.

As the Vikings and Jr. Vikings take to the hardwood this upcoming basketball season, Coach B may not be on the sidelines or in the stands, but his spirit will now live on in the Thomas Ray Boykin Gymnasium at Humboldt Jr./Sr. High School.