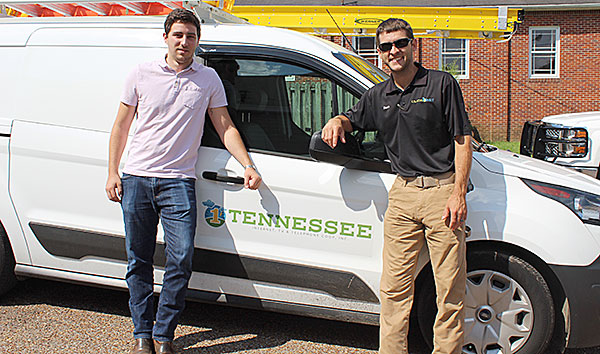 NEW NAME – Click1.net, local cable TV, internet and phone company, has converted to a non-profit membership cooperative called 1Tennessee. President John Warmath (left) and General Manager Dustin Twyman say the business will provide the same services as always with upgrades coming down the pike. All 1Tennessee customers are members of the cooperative and qualify for profit sharing with dividend checks.

The local cable TV, internet company has big, new and major changes coming. Click1.net is in the midst of converting their family-owned, for-profit company to a non-profit telephone cooperative owned by its customers called 1Tennessee.

What will this mean for Click1 customers? As far as services go, not much. But customers, now members of the cooperative, will have more control.

“This gives them more control and transparency within the company,” Warmath said. “Everyone who is a customer is a member. They will participate in the growth.”

“Nothing will change for customers except they will receive a dividend check each year,” Warmath added. “We will keep pricing close to market value, and have the funds for upgrades and in case of a catastrophe, funds to do the work.”

“This transition allows the customers of 1Tennessee to participate in the direction and decision- making of the company,” said Dustin Twyman, general manager of 1Tennessee. “Becoming a telephone cooperative allows us to continue and expand improvements across the system. It is a win for everyone involved.”

1Tennessee will offer the same cable television and internet services, and the recently added phone service. The video (television) part of the company will soon change drastically for the better. Television programming will be using the internet. No longer will customers have the big, bulky digital boxes.

Instead, they will need a smart TV, Amazon Firestick or similar device. If you don’t have one of these already, 1Tennessee will provide one, either for purchase or rental, just like customers currently using digital boxes.

But customers will get much more with the new internet based television such as video on demand, accessibility on all your devices and will have enhanced HD in 4K.

For those who use Click1.net emails, they will continue to work.

Last year Click1 added phone service to their product lines. They will be expanding this service with a business package coming out soon that will include fiber (internet) and voice (phone) that will save businesses money. You will be able to keep your phone numbers as well.

In 1981 Frank Warmath took over operations. In 1999, internet service was added to the company’s repertoire. Warmath Communications became InfoStructure as the parent company. Click1 became the internet company name.

In 2006, the Warmaths got out of the newspaper business, selling the Chronicle, the Tri-City Reporter, West Tennessee Publishing and their part ownership of the Herald Gazette in Trenton to American Hometown Publishing.

In 2015, John Warmath became president and later moved back to Humboldt in 2017 to oversee operations.

A few years ago, all of these new changes might not have happened.

“In the last five years, we’ve had offers (to sell) and almost sold the company in 2016,” Warmath said. “We (John and Frank) talked about what we want our legacy to be. We didn’t feel it was right selling to a big company. We wanted to provide ownership to our customers and our employees.”

Warmath said from that point forward, it began to “snowball” as they delved deeper into becoming a cooperative.

As a cooperative, a board of directors must be created. Warmath said the first board will be a “roll over” with members serving one to three years in order to have staggered terms. Some will be up for re-election at the annual meeting. He noted that meetings will be publicized and live streamed, and will allow Q&A segments for customers.

“Giving ownership to our customers and broadening our ability to expand internet service across rural Gibson County, as well as continuing to provide high quality services, were key factors in our decision to transition to a non-profit telephone cooperative. After 55 years of serving our community, our focus continues to be on what is best for our customers and future growth of the company. Transitioning to a telephone cooperative allows us to achieve all of these goals,” said John Warmath.