Last  year during the White Squirrel Festival week I covered the breakfast and noticed with sadness we had lost a good many of our WWII veterans. There are only two left and I had the good fortune to speak with them. I met V. L. Williamson of the Seabees and Joe Ray Davis of the 2nd Marine Division. Davis was a corpsman.

The folks at the Kenton Youth Center always do a knockout job and Saturday morning was no exception. We began the day off with Command Sergeant Major Harold Banks and Alex Martin conducting the flag raising ceremony. Mary Beth Chandler sang the national anthem as our flag was raised. Chandler gave me chill bumps in her angelic song delivery.

Inside, before we had our chow, State Representative Bill Sanderson played “Taps” on his trumpet. He is a very talented man!

Jesse Griggs was the guest speaker. He is a US Navy veteran. He said, “We may not can fit in our uniforms anymore, but one thing we can say is that we are part of a brotherhood.”

Mayor Danny Jowers recognized the WWII veterans, Korean War veterans and the Vietnam veterans individually by the wars in which they served. Jowers also gave his kudos to Glenn and Cara Zarecor and Nathan and Demi Spencer in their flawless organization in conducting this event. 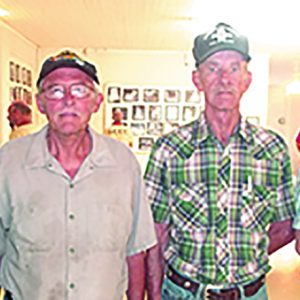